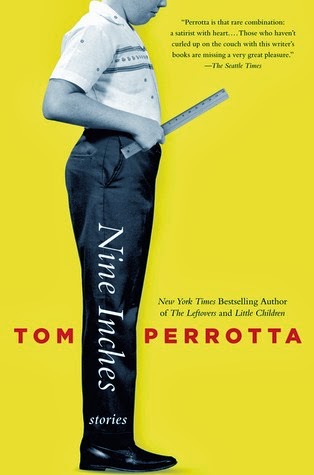 Most of the stories in this collection are recognizable Perrotta, set as they are in schools and suburban neighborhoods, the star characters primarily parents, teachers, and teenagers. In "Backrub" an honor student, who was inexplicably turned down from every college he applied to, now delivers pizza and is being subjected to unwanted advances from a local cop. In "Grade My Teacher" a teacher confronts a student who wrote negative reviews of her online. A man sneaking into his neighbor's garage to use an air compressor on the sly finds more than he bargains for in "Kiddie Pool." A teenaged boy gets paid to take the SATs for other students in "The Test-Taker."

Unlike many short story collections it was easy to just move from one story to the next - maybe because they felt like they could have taken place in the same town to characters who all knew each other. Whatever the reason, instead of my usual habit of reading just one story at a time and then setting the book aside for a while, I plowed through the entire collection in less than a day.

In most collections there are a couple of stories that don't seem as good as the others, but each of the ten stories in Nine Inches deserved its place here and it would be tough to even pick favorites. Some of the stories were sad, filled with lost opportunities and missed connections, and in all of them I felt the same intimacy with the characters as usual in Perrotta's writing. As much as I don't like suburbia, I'm happy to dip into Tom Perrotta's version of it. I'm already looking forward to his next book.
Posted by 3goodrats at 2:19 PM