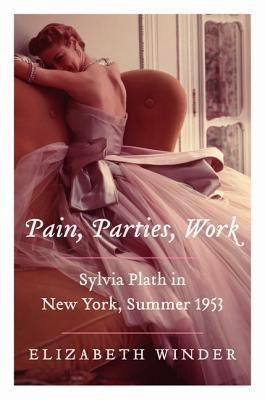 I started reading Sylvia Plath in high school, beginning with The Bell Jar and then moving on to her poetry. At the time I was fascinated with her macabre imagery and, of course, her suicide. But I've continued to admire her poetry over the years, though I don't generally read much poetry.

It was serendipity when I came across Pain, Parties, Work on a shelving cart of recently-returned books at work. I hadn't even heard of it, but was instantly eager to read a book about the summer that inspired Plath to write The Bell Jar.

Plath was at Smith when she joined Mademoiselle magazine's College Board, a national group of collegiate contributors to the magazine. Out of this pool, twenty lucky young women were chosen to spend the summer in New York as guest editors to work on the college issue of the magazine. Sylvia Plath kept extensive journals, but not for this one summer. She wrote only a single entry, and that was focused on the execution of the Rosenbergs. Winder had to consult other sources, such as interviews with the other guest editors, to piece together the story of Plath's summer in New York.

Written in an easy, breezy style, this was a pleasant and quick read, if a bit choppy. The text is frequently broken up with "conversations" that seem to be quotes from various friends put together to look like a conversation (though they don't quite match up in a sensible way), or boxed insets containing bits of information about Plath that doesn't fit into the text. One of those is labeled "Vitals" and contains factoids such as "She never wrote in cursive" and "She went on sixty-seven dates between July 1 and August 31 in the summer of 1949." (Which, wow.) These were fascinating and I'm glad Winder found a way to include them.

Less a cohesive narrative about Plath's summer, instead it was a vivid snapshot of 1950s New York, especially magazine culture. Here's a description of Mademoiselle's offices:

"Desks were littered with black and cream Stork Club machbooks, or crammed with Ferragamo shoes and berry-trimmed hats. Editor in chief Betsy Talbot Blackwell's office was a deep green forest - she called it her boudoir and kept her desk stocked with vodka and ice."

I want to work there.

Details about fashion and sexual mores were also included, as well as the girls' views on feminist issues especially as it pertained to their own career and family goals. Some of the most interesting parts occurred after the editorship was over, when Sylvia went home and sunk into a depression. Less than two months after returning from New York she tried to commit suicide.

It's easy to view Sylvia Plath as a mentally ill women whose entire life is just building up to her suicide, but of course that's not the case. Winder's book gives us a glimpse of the other Sylvia, the one most of her acquaintances knew. Even they didn't all view her in the same way, as Winder emphasizes when pointing out that we are all seen in only one dimension at a time. Sylvia's acquaintances saw her as "a kindred bluestocking" or "a cultivated beauty" or "a caviar-stuffing barbarian" depending on who was observing her at the moment, each under different circumstances. As Sylvia herself was quoted saying, "People are like boxes. You would like to open them up and see what's inside but you can't."
Posted by 3goodrats at 4:34 PM