The Woman Upstairs by Claire Messud (2013) 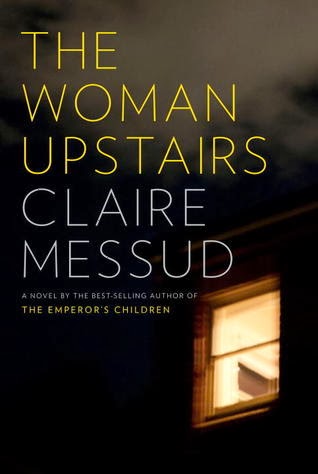 Once a striving artist, Nora is now an elementary school teacher in Cambridge, MA. She lives by herself in an apartment where she is quiet and neat and a good neighbor - the "woman upstairs" who nobody really notices. When a new student shows up in her classroom, she ends up befriending the whole family. They are from Paris, just here for a year while the husband, Skandar, teaches at Harvard. His wife, Sirena, is an artist and she and Nora decide to split some studio space. Nora is increasingly drawn to the family, to each of them individually, becoming consumed by her strengthening obsession.

Messud's writing is beautiful - her word choices and her descriptions were the best part of this novel for me, especially the descriptions of Nora's and Sirena's art projects. The story is compelling in its way - a woman coming to grips with growing older alone, her growing bitterness, and an unhealthy obsession with a family - but it didn't really grab me.

I didn't especially like Nora, but found her recognizable in the way that many women my age will. This made it painful to read. When she first quoted from "The Ballad of Lucy Jordan" it brought me back to my college days and early 20s when I found that song sad and wistful, but it didn't yet apply to me. Now it does. Now that I'm around Nora's age I, too, must come to grips with everything I won't do and that is not a happy thought. Nora is single and failing at her art and she's teaching at an elementary school - because she must do something to earn money - and the worst part is that I can see her sabotaging herself through the entire story.  It's strange to me to obsess over anyone the way Nora did, much less an entire family, so I don't know what to think about her relationship with the Shahids. But the trajectory was well-crafted, from Nora's first meeting with Sirena through the final betrayal.

The story takes place in areas I'm very familiar with. Nora lives in my old Cambridge neighborhood and visits some of my old haunts, like Hi Rise and Formaggio. Her studio is near my current neighborhood in Somerville, and in fact I've gone to Open Studios in the buildings where her studio was. It's always a pleasant distraction to recognize real locations in fiction, and strange to see familiar places through different eyes.

The Woman Upstairs was a pretty hot book when it first came out last year, garnering rave reviews and becoming quite popular and highly-requested (at least in my library system). It was pretty good, but I'm not sure why it took off the way it did. It's not, I don't know, sexy or new or exciting or controversial, and I don't think she has the sort of name recognition that makes everyone flock to her books (though now she might), but obviously there was something compelling about it to a lot of people. I thought it was good, and her eloquent writing elevates it a bit more, but I don't think it's a book that will stick with me.
Posted by 3goodrats at 7:58 PM