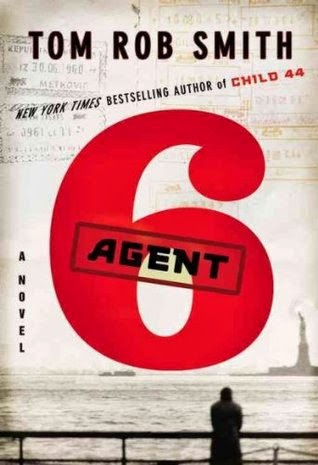 We were first introduced to secret police agent Leo Demidov in Child 44, then continued his story in The Secret Speech. Agent 6 is the latest final volume in this series. It's 1965 and Leo's wife Raisa will be traveling to the US with their daughters to give a concert. Because he left the KGB, Leo is forbidden from traveling abroad so he stays behind in Moscow, worrying and waiting. When his family becomes involved in a plot that ends in tragedy, Leo becomes desperate to hunt down those responsible.

Agent 6 is a saga spanning continents and years. It has two distinct major parts; the first takes place in Russia and in the US, and the second is set unexpectedly in Afghanistan fifteen years later. Leo is again working for the government, as a Soviet advisor for the Afghan Communist regime. Being stationed in Afghanistan - an unpopular assignment - may allow him the opportunity to escape to the US and finally carry out his investigation into the events of 1965. Smith captures both settings quite well, I think, though I rather wished the Afghanistan part was a little shorter.

As with the first two books in the series, the plot was quite well-crafted. Here it revolved partially around a black, communist, American singer named Jesse Austin who was under great scrutiny from the US government and often felt more at home in the Soviet Union. The government destroyed his career because of his political leanings towards the Soviet Union, where, ironically, a similar sort of fear and paranoia reigned.

Leo continues to be an intriguing, though flawed, hero. His single-minded goal for so many years speaks less of justice than stubbornness and an inability to let go of the past. But his life is so tightly controlled in the Soviet Union and he had so little to begin with that every loss is devastating.

Agent 6 is not happy or hopeful, and I'm still undecided about how I feel about the ending. All in all, this trilogy was consistently good, which is fairly unusual. Usually I feel like the second or third book is especially weak, but not here, though I did love the first book a bit more than the others. I don't consider myself a fan of spy novels (I read about half of Tinker, Tailor, Soldier, Spy and understood none of it, and the movie didn't help things any) but Smith's writing is clear, his settings vivid, and his characters real enough that you root for them all the way.
Posted by 3goodrats at 9:00 AM