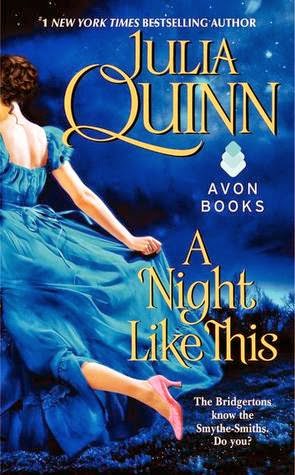 A couple of years ago I read Just Like Heaven, the first novel in this series. Ironically, it was actually a review for A Night Like This that made me want to try it (and the romance genre in general), so why I didn't get to it sooner is rather a mystery.

In a romance series, you obviously can't have the same primary characters in each book. It would dampen the required happy ending a bit if the couple then broke up in order to have romances with other people in the next book. Commonly, a romance series centers on members of a particular family, here the Smythe-Smiths. The first book was about Honoria, but this one stars her brother Daniel who has been in exile for 3 years after accidentally shooting a friend. Newly returned to England, he immediately falls for his cousins' governess, Anne Wynter. But Anne has secrets, and is extremely hesitant to get involved in a relationship. The last time that happened it resulted in having to cast off her old life entirely and take on a new identity.

Just as in the last book, this one begins with a concert of the Smythe-Smith Quartet They are a group of extremely untalented young ladies who do not enjoy playing music but perform every year for a reluctant audience, because tradition. Anne has had to fill in for Sarah, who faked an illness so she wouldn't have to perform, which resulted in Anne's initial meeting with Daniel. Also similar to the last book, this one is infused with a great deal of humor. The story is a bit darker though because of Daniel and Anne's pasts, but I liked that. It heightened the tension and raised the stakes. Though it was even a bit too dramatic at times, I found it overall quite deliciously enjoyable.

Often, the hurdles that keep the love interests from one another feel forced, and there are many times I wish one of the characters would just tell the other person what's going on. But here, it felt convincing. There were secrets that Anne kept from Daniel and it was completely understandable why she would do so. I would have done the same thing in her position.

This is the first romance I've read in a while and it reminded me why I like them. I read this last week while out on vacation and it was just the perfect reading for a few lazy days. The next time I'm thinking of romance, I'll probably look to Julia Quinn again. I've really enjoyed her books so far!
Posted by 3goodrats at 7:01 PM

This does sound like a perfect holiday book. I hardly ever read romance, I don't think I would know where to start!

It's an overwhelming genre, which also includes a mind-boggling array of sub-genres. But Julia Quinn is not a bad starting point if you might be interested in historical romance.