The Handmaid's Tale by Margaret Atwood (1985), narrated by Claire Danes 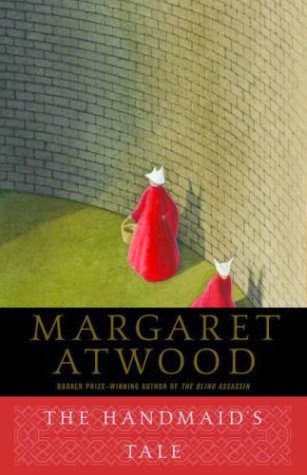 Last year, I reread Alias Grace and it made me want to revisit The Handmaid's Tale, which I last read probably twenty years ago. I think most people are familiar with the premise of the story, but in case you've forgotten, it takes place in a future United States under tight religious-fueled control. The birth rate is extremely low and women who are fertile have been forced to be handmaids for more powerful members of society who are unable to have children. In this new world women are not allowed to work or own property.

The main character is Offred (as in "of Fred") and we never learn her real name, but she remembers the time before, when she had a husband and daughter of her own. She has no idea where they are now. The story of how she lives now is broken up with bits and pieces of her past life and the chilling tale of the time when things changed.

What is so unnerving about the world Atwood has created in the The Handmaid's Tale is that it seems so possible. With the explosion of religious fundamentalism, increase in violent crime, and backlash against feminism such a scenario is disturbingly easy to imagine. Just the fact that Offred lived through the change from our world to this dystopia makes it seem real - she identifies with everything that is familiar about our culture, making her recognizable to us, yet also exists in this strange new world.

And it is strange, despite how small of a leap it would take to get there. A world ruled by extreme paranoia, in which women aren't allowed even to read (that would be a nightmare in itself for me), and in which executions are frequent and the bodies are hung on public display. The handmaids all dress in red uniforms with white wimples, the housekeepers in their own blue uniforms, and everyone with an extremely specific role. Speaking your mind is extremely dangerous, and society is ruled by fear - of execution, or of being sent to the mysteriously unexplained colonies.

This time I chose the audiobook, narrated by Claire Danes. Danes seems an unlikely narrator somehow, but the reviews don't lie - she does an excellent job. Her style is fairly impassive, which seems just right for Offred's voice. This is a woman who can barely believe how her life has changed, but feels forced to accept it, just as she is forced to keep all of her thoughts and feelings bottled inside so she doesn't draw attention to herself.

This literary novel is political and feminist, but in the very best way possible. It has become a modern classic, and with good reason. If you haven't read it, or even if it's just been a long time, I encourage you to pick it up. This fairly short book is packed with not just a captivating story, but also a great deal of fodder for thought and discussion.
Posted by 3goodrats at 3:35 PM