Perv: the sexual deviant in all of us by Jesse Bering (2013) 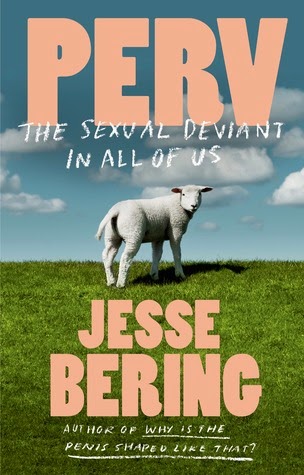 Perv's premise is that we are all sexually deviant in some way so we shouldn't be so judgmental of each other. Bering traces the history of the word "pervert" and how it became known to refer to sexual outliers, and discusses how our notions of what is unacceptable has changed over time. He also points out that our laws are based on morality, not on actual harm, and examines the notion of harm in a way that made me look at it rather differently. These arguments are illustrated vividly with many examples of various practices and people who fall outside the accepted parameters of normal sexual behavior.

While reading, I was never exactly sure how the book was organized. Looking back at it now, it makes a lot more sense but it's really difficult to follow a rather intellectual argument when it's thoroughly peppered with so many fascinating tidbits about people and practices that thoroughly distracted me from the discussion at hand. I'm not going to lie - several times I put my book aside and picked up my laptop so I could look up something or someone Bering mentioned in passing because what he gave me was a bit of a tease. I needed to know more, for example, about Erika Eiffel who married the Eiffel Tower. And then there's Milo and Elijah Peters, twin brothers and porn stars who not only have sex with each other on camera, but are romantically involved in real life. (Spoiler alert: since publication of this book, one of them acquired a girlfriend and they no longer speak to each other.)

I was also astonished by how many things there are words for. I have to wonder how many people have to be turned on by, say, the rays of the sun before it gets its own word (actirasty, if you're wondering.) There are also acrotomophiles, amputee fetishists, and their cousins, apotemnophiles, whose fantasies involve having their own limbs removed. My favorite though, are the climacophiles, people who experience their most intense orgasms while falling down stairs. How would you even discover such a thing about yourself? It's hard to imagine a situation in which one would be having an orgasm while falling down stairs, much less having the situation crop enough to be able to distinguish between those who find that it heightens their pleasure, and those who don't. It would also be difficult to have a relationship with someone who doesn't share your predilection. I mean, for them it's just a potential trip to the emergency room.

As you can see, I learned a lot from this book which is why I really should read more nonfiction. Apparently it's all about picking the right subject matter, because I read this considerably more quickly than probably any other nonfiction book.

Despite all the salacious material though, the lesson of Perv is not to cast stones. The author was willing to share a lot of personal details about himself for the sake of argument, to point out that the most normal-seeming of us have interesting quirks and they are just part of who we are. Many of his points about morality and harm, and pretty much everything he says about pedophilia - which nobody talks about, except in a witch-hunt sort of way - are worthy of further thought and discussion. This would be a great choice for an adventurous book group.
Posted by 3goodrats at 9:54 AM