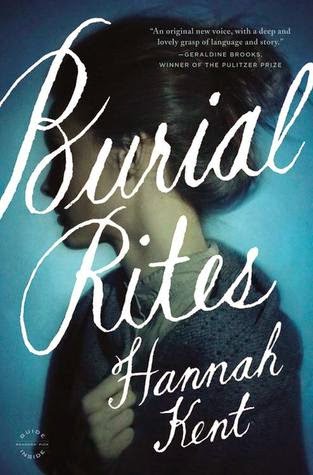 In 1829, Agnes Magnusdottir has been charged with a brutal murder and is awaiting her execution. During this time she boards with a family in the countryside and is counseled by a young priest known informally as Toti. An unwelcome guest to the Icelandic family who is forced to take her in, Agnes is a source of tension for the family, especially at first. As her execution date draws closer, her story is slowly revealed.

Lauded by critics, blogs, and everyone I know who has read it, I was really looking forward to this historical novel about a real-life accused murderess. But I found it slow, even tedious at times, and through most of the book I just kept waiting for something to happen. When the novel opens, the trial is already over, so almost all the reader gets to experience is the waiting. Of course we don't know the real story of what happened that night, and Kent does her best to convince us that Agnes not the murdering type. Predictably, the truth is not simple, but when all was revealed it was not much of a surprise, certainly not enough to justify the buildup.

Parts were in third person and focused on Margret, the complex mother of the farm family who I would have liked to get to know better, and the priest Toti, who Agnes chose to be her counsel. Toti was young and unprepared for this task, and he became quite drawn to Agnes, struggling with his feelings throughout the story. I enjoyed the parts about Toti most of all.

Agnes herself was difficult for me to sympathize with at times. She begins telling the story of her life to Toti, and then to Margret, leading up to the double murder at Natan Ketilsson's farm. It was clear she had a complicated relationship with Natan, who she was accused of murdering along with two alleged accomplices. He was known as a womanizer, but since we learn this up front, it's difficult to share in Agnes's feelings of betrayal when she comes to that part in her story. In fact, in terms of her relationship with Natan, she seems rather naive for someone in her thirties.

I think a bit of my problem with this book was that I listened to the audio instead of reading it. Christie's narration was good, but a bit high and thin and whispery when she did Agnes' voice, and I didn't care for that. It certainly didn't help a story that I already found rather boring. While listening to this (which I should mention took me over three weeks) I came across an article about a study that shows our minds wander more while listening to audiobooks than by reading, and that we retain less of the information. This reaffirms what I already suspected, and perhaps I got too cocky after my enjoyment of literary audio books like Beautiful Ruins and Rules of Civility. I need to go back to restricting my listening to young adult books and chick lit like I used to.

Despite my feelings about the format, I don't think I really missed anything, and although I may have enjoyed the book a bit more had I read the print version I still don't think I would have liked it a whole lot. Usually I really enjoy books set in cold climates, but it needs a really good story as well and this just wasn't enough for me. The initial setup was interesting, as was the very end, but I'm afraid I all but lost interest in the long slow middle. I can appreciate the high caliber of the writing, but I'm afraid it just wasn't enough to sustain my interest. I'm obviously in the minority here, but I just couldn't feel enthusiastic about this novel.
Posted by 3goodrats at 8:17 PM