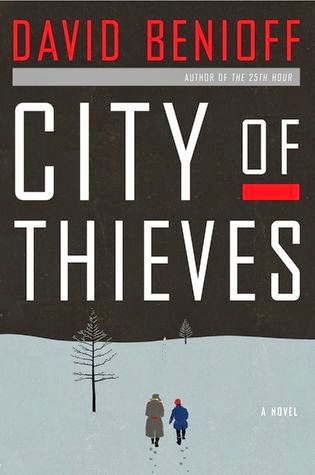 During the Siege of Leningrad, Lev Beniov is arrested for looting and thrown in jail with a deserter named Kolya. They are given a chance to escape execution - by bringing a dozen eggs to to a powerful colonel who needs them for his daughter's wedding cake. Food is so scarce at this time that people are eating their pets, paper, and each other. But Lev and Kolya are determined to find eggs to buy their lives, and embark on a dangerous and unforgettable journey around Leningrad.

Best described as a tragicomedy, the horrors that Lev witnesses are softened for the reader through his (albeit dark) humor. How else can one deal with so many close calls, so many gruesome deaths? Lev and Kolya often silence their banter in such times, but only for a bit, because they need to go on. What choice do they have? They have their own lives to think of.

Throughout all of this it is bitterly, bitingly, bone-achingly cold. I read most of it while huddled under an afghan because it was so cold here too, but of course that was nothing compared to what these Russian youths endured. In one scene, they approached a soldier from the back only to find that he was frozen dead in an upright position. This wasn't just cold; this was Russian cold, and it only enhanced the feelings of desperation throughout the novel. When Lev and Kolya occasionally arrived someplace warm, the atmosphere completely changed, and the happiness and comfort let them forget their troubles if even just for a short while.

What keeps Lev going throughout all of this is Kolya. Relentlessly upbeat, Kolya entertains Lev with stories about all the women he has had (Lev is younger and lamentably unexperienced) and expositions about literature, especially a novel called The Courtyard Hound. Kolya's optimism and easygoing self-assurance reminded me a bit of Boris in The Goldfinch, and I wonder if that's a set of traits common to Russians or just to their literature. Either way, he made an appealing counterpart to the less confident, anxious Lev. Though they began as strangers, their friendship strengthened through the course of their adventures and their growing loyalty to one another provided the most touching moments in the story.

This is all couched within another story. The opening chapter is told from the perspective of Lev's grandson, visiting his grandparents to get information about the Leningrad for an autobiographical essay he needs to write. As usual in this kind of setup, I completely forgot about this outer story. It wasn't completely necessary, but it was amusing to re-read that first chapter after finishing the novel.

I keep thinking that I'm completely burnt out on novels from World War II, and then I come across one that offers a fresh perspective and I forget that I'm reading about the same war. Of course, I never grow tired of anything set in Russia, and this rather madcap story about the friendship of two young men on the hunt for a dozen eggs was delightful and satisfying (even if it made me hungry for an omelet.)
Posted by 3goodrats at 11:32 AM