I started a new sock and kept meaning to post about it, and now it's finished already. Here's a picture from yesterday when I was partway through the toe decreases. 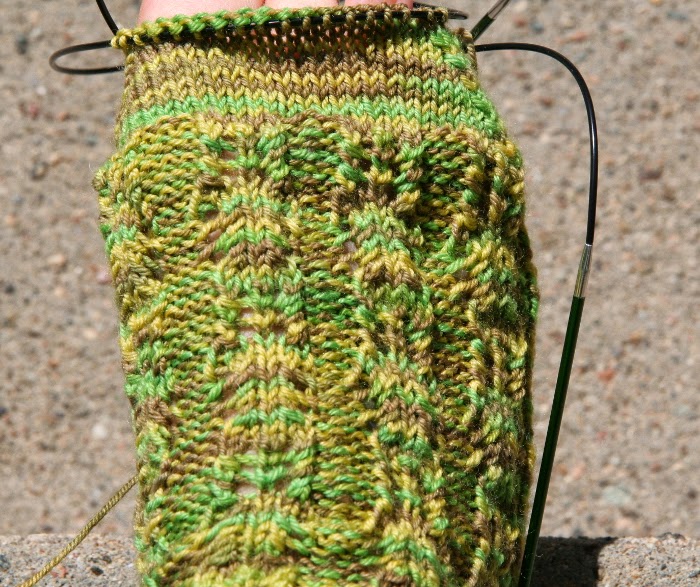 This is another pattern from Sensational Knitted Socks, called Traveling Eyelet Rib. I felt a strong need to knit something in a springy color, and when I discovered this green Lorna's Laces yarn in my stash, I cast on quite eagerly.

I also accidentally started a sweater. During my yarn-buying binge at Windsor Button before it closed, I bought some Cascade 220 in a sort of dark bright blue. Every time I find a pattern that I want to make that calls for worsted weight yarn, I think of that yarn but it never seems like the right color.

My other option was the Feathernest Raglan, but when I sat down to make a swatch I realized it was knit in the round. I've never really had much accuracy or success with this situation. You can knit a regular swatch of the pattern back and forth, but know that it will probably be off because that's just not how you'll be knitting it. Alternatively, you can try to knit it in the round. Swatches in the round can be made most easily by knitting across the row, then just leaving a long piece of yarn in the back and starting at the beginning of the row again. I've done it, and it's messy - I either leave the piece too long, or make it too short, which distorts the whole thing. If you want to be really accurate, you can knit an entire tube, which means using magic loop or double-pointed needles, and it should pretty much mimic how your sleeve will come out. But an entire tube is larger than a small swatch and I am lazy.

So I just started the sweater. Because when one is too lazy to make an accurate gauge swatch, it makes so much more sense to knit the entire top half of a sweater for, essentially, a gauge swatch. 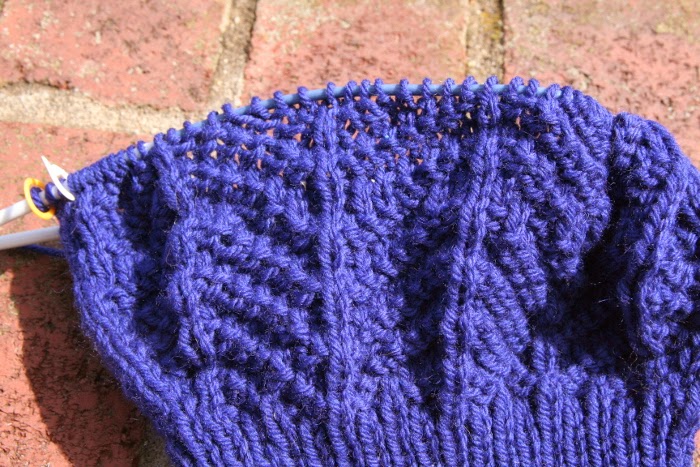 The yarn looks much brighter in natural light. Inside, it's pretty dark.

I'm making pretty good progress on the knitting. Soon I'll separate the arms from the body, try it on, and see whether I should keep going or rip it out and start again. Should be fun.
Posted by 3goodrats at 9:41 AM