The Radioactive Boy Scout: the frightening true story of a whiz kid and his homemade nuclear reactor by Ken Silverstein (2004) 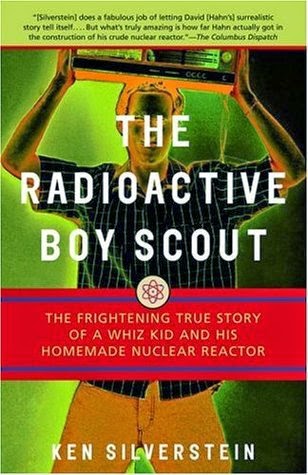 He wasn't a very good student, but David Hahn was nevertheless fascinated by science, especially chemistry. Inspired by the old and out-of-print Golden Book of Chemistry Experiments he received as a gift, David began a series of experiments that grew more and more dangerous, turning his mother's backyard potting shed into a laboratory where he ultimately tried to create a breeder reactor. In the course of his research, the difficulty in obtaining certain materials led him to extract them from common household items, which were fairly large projects in themselves. Before he could finish, a whole host of organizations - including the EPA and FBI - descended upon him, terrifying the neighborhood and bringing his experiments to a halt.

Science has never been my strong subject, but I found this true story fascinating. Woven into David's story was a great deal of information about the history of nuclear science and the quest to create a breeder reactor - a nuclear reactor that creates its own fissile material to generate energy. Although written for a teenage audience, I didn't understand a lot of the the science (at which I have never excelled), but that's not essential to appreciating the story. It's more about this boy and his obsession with the project, and the lengths he was willing to go to achieve his goals. Despite how dangerous it was, I was actually a little envious of his focus and dedication, not to mention his aptitude for science.

The story took place in the mid-90s and I was inspired to try and find out whatever happened to David Hahn. According to this article, he never really changed much, continuing to conduct science experiments while not really focusing on a career. He has been diagnosed with schizophrenia and bipolar disorder, and was arrested in 2007 for stealing smoke detectors for their radioactive parts. I really wanted to hear that he had become more disciplined and pursued a career as a scientist, because he truly seemed very intelligent and driven, but instead it appears that his life is pretty difficult and unfocused.

One aspect of this story that interested me a lot was related to the book The Golden Book of Chemistry Experiments. I believe it was published back in the 60s, and Silverstein contrasts the content with current books about science experiments that encourage nothing more dangerous than raising worms or observing microbes under a microscope. I certainly wouldn't encourage teenagers to endanger their lives the way Hahn did, but I began to wonder if we're trading valuable knowledge and inspiration for safety. After all, it wasn't a current textbook that inspired David - it was this older, more risky one. What other kids may have been inspired to a career in science if they had the opportunity to conduct more interesting experiments as a child? Soon after reading this book I came across a thought-provoking article in The Atlantic called "The Overprotected Kid" which speaks to exactly these issues. The article is focused on playgrounds, but emphasizes the needs to explore and take risks, and cautions against creating environments that are too safe, and in which kids won't learn to watch out for danger. It's a lengthy article, but I recommend at least looking at the pictures and the 3-minute clip about a playground called The Land, where kids are free to engage in exploration and can even set things on fire.

What I love about a good nonfiction book is how it can be a jumping-off point for learning about related topics, and I'm sure The Radioactive Boy Scout will generate some great discussion at the upcoming Not-So-Young Adult book group.

Have you read any great nonfiction books written for teenagers? I'd love to suggest some more to the book group.
Posted by 3goodrats at 3:01 PM