Keeping the Castle by Patricia Kindl (2012) 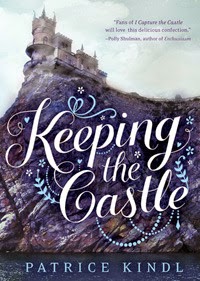 In the small Yorkshire town of Lesser Hoo a crumbling castle perches atop a cliff. Inside lives Althea Crowley, her mother, little brother, and two step-sisters. Althea must find a marriage prospect in order to keep Crawley Castle in the family, and as the story opens she is completely bungling her opportunity with one formerly-willingly gentleman. But no matter; the dashing Lord Boring has arrived in the neighborhood and Althea is determined to make herself his wife. If only his irritating cousin Mr. Fredericks would get out of the way...

This novel was recommended to me as a book with Downton Abbey appeal, but I found it much more like Pride and Prejudice. Many of the plot points were very similar, and the tone was similarly light-hearted, thought it was funnier and bit more fluffy. The ending was predictable (especially if you're familiar with Pride and Prejudice) but by then it was clear this wasn't an especially literary or risky novel. It was just a good bit of fun.

The whole premise was quite appealing. I like the storyline of a family down on their luck, living in a castle in disrepair, so poor they served guests minnows from the moat. The mean, superficial step-sisters may be a well-used trope, but it's one I like. And of course, I always like a bit of old-fashioned English-society romance. Althea was flighty and bumbling, yet likeable, and the male romantic interests ranged from slightly dubious to ridiculous. I always appreciate humor, which was really what made this novel. But there was also a rather delicious and scandalous secret that I didn't expect.

This was a contender for my Not-So-Young Adult Book Group at the library and I'm actually glad we didn't end up reading it. Although I liked it well enough, it's quite fluffy and there's not a lot to discuss. That would have been an awkward meeting. It's been on my to read list for quite a while, and I've ultimately read it for the TBR Pile Challenge. This won't be a novel that sticks with me at all, but it made for a few pleasant and enjoyable hours of reading.
Posted by 3goodrats at 9:00 AM

Although this isn't a book that had a great impact on you, it sounds like a lot of fun!

It's pretty enjoyable. I'd recommend it if you want something entertaining that you don't have to think too much about. It would be great plane reading!