Under the Banner of Heaven

Under the Banner of Heaven: A Story of Violent Faith by Jon Krakauer (2003) 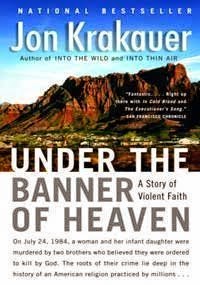 One day in 1984 a young woman and her baby were murdered in their home. The two men responsible were her husband's brothers, Fundamentalist Mormons who claim they were directed by God to commit the murders. Jon Krakauer takes a close look at this family, and at the short, bloody history of the LDS church and its off-shoots of Mormon Fundamentalism.

Honestly, I don't even know where to start with this. There is so much information packed into this book and a lot of it is so fucked up that it kind of makes my head spin. Predictably, I've come out of this reading experience thinking that Mormon Fundamentalists are crazy. What I didn't expect was that I'd come to believe that even the mainstream LDS church is pretty misguided, if not also crazy. Reading about the origins of that religion, I can't imagine why anyone would choose to follow it. (Granted, I am an atheist and find all religion unbelievable, but this one seems especially far-fetched.)

For those of you who are unfamiliar with the LDS church, it was founded by a guy named Joseph Smith who was led to some special gold tablets by an angel named Moroni but then wasn't allowed to read what was on them so he put his face into a hat containing a magic rock and saw lots of visions which, clearly, were from these tablets and he wrote them down and that, my friends, is the Book of Mormon. Smith then went on to have many grand "revelations" including the one about plural marriage, which was a hard sell even in the 1830s. But he was quite intent on being able to have sex with any woman (or girl) he wanted, so he was determined to spread that part of God's plan especially.

There's a lot else that happened between then and the murders, but it's not hard to see how the Lafferty brothers found it so reasonable to believe that God ordered them to murder their brother's wife and child. Because, you know, God works in mysterious ways.

Here is a sampling of things I learned about fundamentalist Mormons that are horrifying:
Let's review:
Having sex with a consulting adult of your own gender is punishable by death.
Raping your own child is condoned by God.

In this context, the murders don't seem like such a huge anomaly. Ron Lafferty was the one held most culpable, receiving the death penalty, though his brother Dan was convicted also. Ron has appealed over and over again and although the murders occurred 30 years ago he is apparently still alive. What I found most interesting about his trial was the debate surrounding whether or not he was insane. Using the insanity defense would be like saying that anyone who prays to God for guidance is mentally ill, and nobody wanted to make that argument. Even the sort of revelations that Ron Lafferty received are an integral part of the mainstream LDS church.

There is always this idea that one's beliefs are the true beliefs and those who think differently are wrong and with religion that is an argument that will never be solved. Dan Lafferty is quoted in the book comparing their crime with those of the September 11th terrorists. He says, "I have to admit, the terrorists were following their prophet. They were willing to do essentially what I did. I see the parallel. But the difference between those guys and me is, they were following a false prophet, and I'm not." And that is one of the reasons why I feel that religion is inherently dangerous.

It bothered me a little that Krakauer relayed so many of the religious parts of the story as though they were fact. He would say that someone received a revelation, or that Joseph Smith was visited by an angel, as though it was a fact. It seemed obvious to me that these people were hearing and seeing exactly what they wanted. Of course Joseph Smith would be told he should have many wives, and of course Ron Lafferty would be told to kill someone he hated. Perhaps Krakauer just didn't think he needed to insert a note of skepticism as the stories speak for themselves. I suppose it's also a bit telling that the book ends with a former fundamentalist talking about how he is now an atheist.

On the whole, Krakauer's research and writing was pretty top-notch, as far as I can tell. Perhaps Mormons feel differently, but it felt quite thorough as I was reading it. I got a bit bogged down in the middle in a historical part, but have to admit it was all valuable information. Anyhow, it picked up again quite soon and I was engrossed once more until I finished. Included at the end are a bibliography and (so helpfully!) a glossary that I used several times.

So if you are interested at all in what makes people do crazy, violent things, or in religion, or in taking a close look at a specific culture, I would definitely recommend Under the Banner of Heaven.

Do you have suggestions of other books that take an interesting look at religion? Does Going Clear live up to all the hype? And if you've read Under the Banner of Heaven, what was your take?
Posted by 3goodrats at 10:41 PM