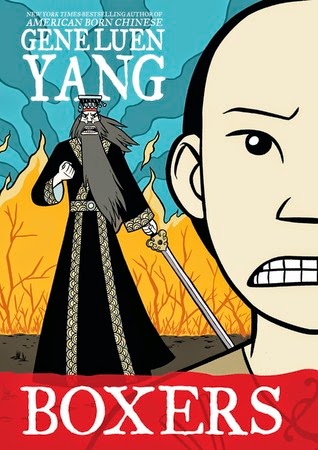 1989 saw the beginning of the Boxer Rebellion in China, an uprising against "foreign devils" who brought Christianity to China. Boxers is the story of Little Bao, who leaves home with a band of villagers trained in kung fu. They take on the forms of ancient gods when they fight, and this strength helps them fight the foreigners and the Chinese who have converted to Christianity. One such converted Christian is Vibiana, whose story is told through the accompanying volume, Saints. Known only as Four-Girl by her family, she becomes acquainted with Christians and is further encouraged by her visions of Joan of Arc, ultimately becoming just as enmeshed in the violent rebellion as Little Bao. These two graphic novels come together in a boxed set and though they are technically two separate books I'll consider them together.

Before I heard about these books, I hadn't even heard of the Boxer Rebellion. Reading Boxers first, I think I got the basic idea of what it was about. When I began reading the parts about the men turning into ancient gods, I ended up reading the Wikipedia entry about the Boxer Rebellion because I couldn't trust this book as fact. Turns out, the Boxers actually did believe that spirit possession helped them to fight better. I really enjoyed Little Bao's story and the vibrant art. 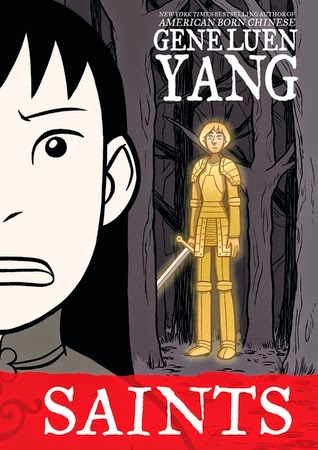 Saints was a little different. Vibiana was pretty unconvincing as a Christian so I didn't feel like she represented the Christian side of the story the way that Little Bao represented the Boxers. When she began hanging out with Christians, it was to get out of her house and because they gave her cookies. I never felt like she actually believed in the religion. But is that what the author is trying to say? That the Chinese people who adopted Christianity never embraced it fully? This volume was much shorter than the other and there was simply less story. It was disappointing after reading Boxers.

I looked forward to reading these as I enjoyed Yang's American Born Chinese so much, but only Boxers lived up to my expectations. Although collectively far from perfect, they tackle an interesting and overlooked historical topic and would be great for discussion.
Posted by 3goodrats at 8:38 PM