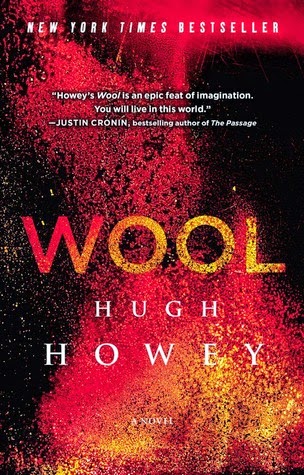 Hugh Howey self-published Wool a few years back and it got very popular by word-of-mouth until Simon & Schuster bought it and published all 5 parts together in one volume. And we all realized that publishing had changed. It's an interesting and inspiring story that got my attention, but ultimately that's not why I read it.

Wool is probably my favorite kind of dystopia. An apocalyptic event has happened, society as we know it has transformed and adapted, and the book introduces us to this new society just when things are maybe about to change again. In this world, everyone lives in a huge underground silo, with well over a hundred levels of apartments, gardens, factories, and a big IT department. Screens on the top levels show the outside, a brown and barren landscape that is inhospitable to humans. When someone has committed the most serious crimes they are sent to "cleaning." This means they are sent outside in a suit that will only protect them for a brief time, and they clean the sensors to afford a better view before perishing in the toxic environment. Curiously, nobody has ever refused to clean when they are sent outside.

The story begins with Holston, a sheriff whose wife was sent to cleaning a few years ago after she comes across some information she wasn't supposed to see. It made her raise some dangerous questions, and infected Holston with doubts. He now, in turn, has requested to go outside, convinced that there is more out there than they are being told. He's right, of course, but not in the way he believes. When seeds of doubt are planted, people revolt, and those in power need to quash any uprising before it destroys them all. But does that mean keeping the status quo, and keeping everyone in the dark about the world? A young woman named Juliette may have the answer.

Wool was gripping from the very beginning and I read the entire 500-page novel in just a few days. I frequently struggle with science fiction because of poor character development or technical talk that I can't follow easily, but this was ideal. Howey created a vivid, detailed world that I was able to visualize and imagine myself in, and filled it with people who were recognizable and real and who I rooted for (well, in most cases.) It was about individuals and their actions, but also about how just a small bit of doubt can spread and cause huge societal upheaval. I think I loved everything about this book.
Posted by 3goodrats at 9:56 AM