We Were Liars by E. Lockhart (2014), narrated by Ariadne Meyers 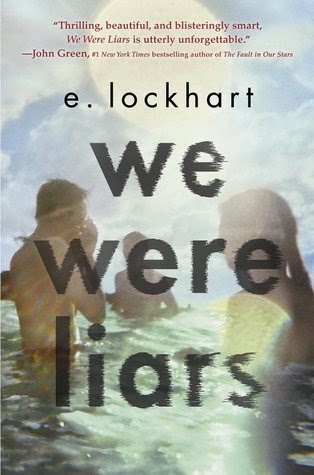 Cadence Sinclair Eastman has grown up in a wealthy family and spends her summers on their private island off the coast of Massachusetts. She is close to her cousins, Johnny and Mirren, and two summers ago was beginning a romance with Gat, the nephew of her aunt's boyfriend. But something happened that summer that Cady can't remember. There was an accident from which she still hasn't recovered, and this summer she returns to the island and through the haze of her migraines she tries to piece it together.

On the surface, Cady's life is pretty sweet. I mean, her family owns an entire island. Cady's mother and both of her aunts each have their own large house on the island, while her grandfather, the patriarch, rules over this domain from his own large house. They all come to the island every summer, their regular lives fading off into the background for those few, magical months.

But just like any family, they have their share of unhappinesses. Cady's father left them, an event she describes as him shooting her through the heart (and indeed, her narration is filled with bloody metaphors). And of course, this mysterious accident that nobody will talk about, but which seems to have changed her family somehow. Even her cousins and Gat aren't as bright and fun-loving this summer as they have been in the past.

Whenever I read fiction in which somebody has memory problems after a traumatic event, I wonder how realistic it is. I know that our minds do strange things, but I'm never sure if it's the kinds of things portrayed in fiction. Nevertheless, the mystery and Cady's determination to figure it out propelled me through the story.

Despite her head injury, Cady was a recognizable teenager. She was desperately in love with Gat and upset that he didn't contact her after her accident (never mind that she didn't try to contact him either.) She argued with her grandfather when she learned that the small animal statues in each of their houses were made from ivory, lecturing him about the evils of hunting elephants. She also remained so wrapped up in her own life that it was hard for her to see what was going on with everyone else.

I like the relationship between Cady and her grandpa. It wasn't a great relationship in many ways, but he still came across kind of positively. His problems with dementia mirrored her own memory problems and I found it quite sweet the day they took the boat to Edgartown for fudge though neither of them were supposed to be boating. It was like their own tiny little conspiracy.

This was probably the quickest I've ever raced through an audiobook, because I just had to find out what was going on. Then I just wanted to talk to everyone I knew who had read it - it's just that kind of book. It's very different than the one other book I've read by E. Lockhart, The Disreputable History of Frankie Landau-Banks. This one is clearly more successful, but I think I prefer Frankie Landau-Banks, just out of my deep admiration of her character. Still, there is good reason this book is hot right now, so readers of YA fiction will not want to miss it.
Posted by 3goodrats at 9:30 AM