The Perils of Pleasure 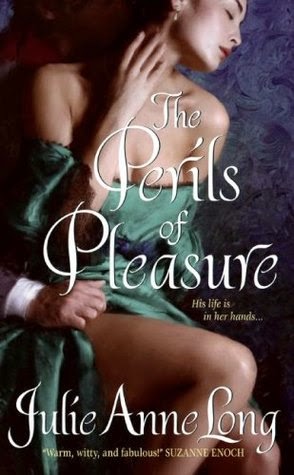 Colin Eversea is about to hang for a murder he did not commit. At the very last moment, he is rescued by the beautiful mercenary Madeleine Greenway. Now he must race against time to clear his name and stop his brother from marrying the woman who is really meant for him. But when it becomes clear that someone is trying to kill Madeleine, the two become a stronger team than ever as they try to prove his innocence. As you might expect, this is all complicated by a growing passion both Colin and Madeleine are powerless to resist.

The danger and intrigue set this apart from many period romances, and added needed tension and action. Otherwise, it was only ok. I have no major complaints but I wasn't especially invested in the romance between Colin and Madeleine.

The main barrier between the two characters was his stubborn love for his brother's bride-to-be Louisa, and Colin remained convinced of his love much longer than I think he should have. He at least should have had some doubts when it became obvious that passion was brewing between he and Madeleine. He just kept assuming he still loved Louisa and was going to marry her. His romantic feelings remained too compartmentalized, even for me.

Madeleine Greenway could have been more interesting than she was. She is a widow, having lost her family to smallpox and then lose their business as well, so she became a mercenary. The story of how she lost everything and then turned to this dark business would have made a great story, but we got only bits of it. As she began falling for Colin, she was just as resistant as he was, but her reasons were more unclear and possibly a bit neurotic.

Perhaps this is better for people who are more into romance than I am, but it didn't measure up to some of the others I've read, like the two by Julia Quinn, or Texas Destiny, or A Lady Awakened. Romance is pretty hit-or-miss for me it seems, and for every one I find that I like I read another that I don't like very much. I wish I could figure out the pattern so I could make consistently wiser choices.
Posted by 3goodrats at 4:51 PM