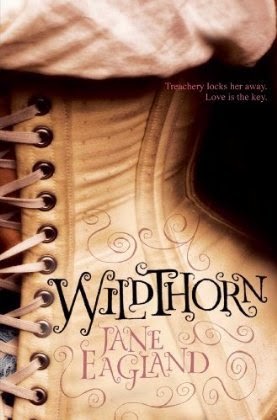 Louisa Cosgrove wants more than anything to be a doctor. Her father always encouraged her in her studies, even while her mother tried to turn her into a proper Victorian young lady. But Louisa's father is dead now, and she is being sent away to stay with the Woodville's. When she steps out of the carriage, however, she finds herself at Wildthorn Hall, an insane asylum, and the staff all call her Lucy Childs. Who has played such an awful trick on her? And how will she ever get out of this place?

Everything in the description of this book sounded up my alley, but somehow when I began reading I initially felt like I had heard it all before. I've read a number of oppressed-Victorian-girl novels, including some wrongly-imprisoned-Victorian-girl variations and I love them, but will admit that for a while at the beginning of this book I thought "Oh, another one of those," and inwardly rolled my eyes a bit. But then I kept reading, and became ever more engrossed in this story, forgetting all about those other books entirely.

It begins with the ride to Wildthorn Hall, and continues with Louisa's time there, but interspersed with the present are chapters beginning early in her life and jumping ever closer to the present so we can see the chain of events that brought her here. Helpfully, the chapters in the past appear in a different font, a style which I suddenly wish every book written with this construction would use. In these chapters, we get snippets of Louisa's life as a child, but much more from the past year when events conspired to bring her to her unfortunate present.

It was easy to see from the start that Louisa's nonconformity would be a problem for her. As a child she was a tomboy, and in desperation her mother once invited over a family with a proper little girl in hopes they would become friends and, presumably, Louisa would learn from her. Instead, Louisa showed off her collection of specimens, which included a dead mouse, and then offered to test the other child's green stockings for arsenic. That was pretty much the end of the friendship, but it only made me like Louisa more.

When she finds herself at Wildthorn she initially assumes it was all a horrible mistake, but slowly grows to realize she was committed intentionally. At this point the story only gets more interesting, as Louisa shows just how strong and capable she really is.

Wildthorn is a very satisfying historical novel about a young woman who refuses to conform. Anyone who enjoys a strong female lead in their Victorian novels will find a lot to like here.
Posted by 3goodrats at 7:59 AM