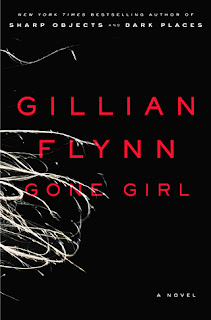 On the morning of Nick and Amy's fifth anniversary, she got up early and made crepes for their breakfast. Then she disappeared - Nick returning home later to find overturned and smashed furniture in the living room. He calls the police to report her missing, but during questioning evades certain topics while ignoring a mysterious caller who keeps ringing his phone. Soon, eyes turn towards Nick as the prime suspect. In alternating chapters, we learn their story - or what they want us to know of it - through Nick's evasive narration and Amy's revealing diary.

Their marriage, we quickly learn, was fraught with tension. Amy struggles between being a "cool girl" who doesn't nag her husband, and wanting him to have some consideration for her. She makes fun of the "dancing monkeys" - men who she feels do whatever their wives tell them - while trying not to be upset at Nick's failure to show up when they had plans. Nick harbors his own resentments and frequently seems more allied with his twin sister than his wife. The more we learn about their relationship, the more the plot is complicated, and the more terrifying the story becomes.

There are so many delicious little secrets unveiled one by one throughout the book, changing the game again and again. One of the best things about it was that even though a lot of the story is told first-person by Nick, you just can't tell whether or not he's guilty - I turned back many times to re-read passages that could be interpreted in different ways. Amy too, is hard to get a handle on. Just who is this woman?

Just as compelling as the story is its backdrop, a town economically destroyed, full of the bitter unemployed. An abandoned mall full of squatters is an eerie and almost dystopian touch. This bleak setting only added to the unsettled feeling that grew steadily with every page.

This brilliant psychological novel is a page-turner, manipulating the reader the way the characters manipulate each other. I sort of felt like I needed to see a therapist when I finished, but I mean that in the best way possible.
Posted by 3goodrats at 8:00 AM

I sort of felt like I needed therapy when I was done with it too! For some reason I was analyzing and questioning my relationship with my husband while reading, even though we're totally not like Nick & Amy. And in a way I was rooting for both of them, even though they are both horrible. Such a great story!

Me too - it made me very suspicious of Eric :) I sympathized with both of the characters at various times throughout the book, while simultaneously hating them. So confusing!