Your House Is on Fire, Your Children All Gone

Your House Is on Fire, Your Children All Gone by Stefan Kiesbye (2012) 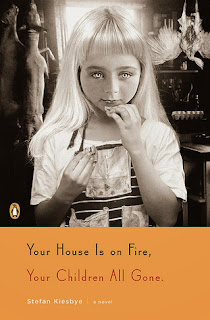 In the strange little village of Hemmersmoor, a few childhood friends who are now adults and haven't seen each other for a while meet at a funeral. In a narration that switches between four characters, flashbacks to a series of vignettes from their childhood creates a weird and twisted story of murder, incest, and betrayals.

It's hard to know where to start with this one. This was a weird little book. Imagine Shirley Jackson's We Have Always Lived in the Castle mating with Grimm's Fairy Tales and this might be the product of their union. It's got that eerie Jackson style, but the killing is quick and brutal and matter-of-fact like a fairy tale. I hardly know what to make of it, but believe me, I clutched onto this thing and read it in just a few sittings.

When a cooking contest results in unease, villagers band together and murder one of the participants. A young boy kills his sister, another group of boys let a friend take a wild risk knowing that he's sure to die, a man smashes his daughter's face into a mirror, scarring her for life. Each time one of these horrible things happened, I was shocked, and when it seemed like another sinister act was about to take place I thought "Surely, not again..." But it did. It always did. And despite the number of murders, the most significant betrayal in the book cost its victim only a scholarship.

Also, is that the creepiest cover EVER? That is most of the reason I wanted to read this in the first place. Your House Is on Fire, Your Children All Gone is quite unusual and not for everyone, but at 200 pages it's not much of an investment time-wise. I recommend trying it if you like Shirley Jackson or Ray Bradbury, or just want something bizarre and creepy that packs a bit of a punch.
Posted by 3goodrats at 9:00 AM

Labels: books, fiction, reviews, stefan kiesbye, your house is on fire your children all gone