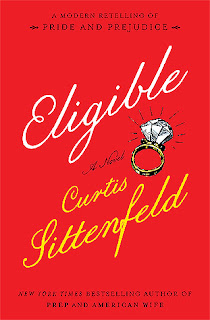 Curtis Sittenfeld's newest novel is a modern-day retelling of Pride and Prejudice. When Mr. Bennet suffers a health scare, Liz and Jane rush home to Cincinnati where their three younger sisters still live at home. Jane, almost forty, is a yoga instructor and Liz writes for a magazine. Mary is a perpetual student and a recluse, while the youngest sisters, Kitty and Lydia, are obsessed with CrossFit and their paleo diets. Liz learns soon after arriving that the family's financial troubles have come to a head with Mr. Bennet's hospitalization because they don't have health insurance, and the house is falling into disrepair, and she quickly takes it upon herself to find a solution. Meanwhile, mutual friends introduce the family to Chip Bingley, a new doctor at the hospital where Mr. Bennet just stayed, who is well-known for a stint on a reality show called Eligible. He is instantly smitten with Jane, and through him Liz meets the impossible Mr. Darcy. And they're off!

I cannot even express what a perfect job Sittenfeld has done in modernizing this novel. She has kept the essence of all the characters and plot points exactly the same, but outfitted them in the trappings of current times. Lydia and Kitty are ridiculous, frivolous people, so it makes perfect sense that they don't have jobs and spend all their time working out and painting their nails. Mrs. Bennet is hysterical and anxious and kind of a bigot. ("Jews are very fond of dried fruit," she inexplicably says at one point. Yet that's exactly the sort of thing Austen's Mrs. Bennet would say.) Updating the romance aspect of the story, they're all sleeping with each other - well, Jane with Chip and Liz with Darcy - because distant flirting won't do in 2013. To achieve the emotional stakes needed, sex is required. And the elopement! I won't spoil it by saying why it's scandalous, but again she picked the perfect situation to cause Mrs. Bennet the kind of consternation required for her necessary histrionics.

At the same time, some parts were able to be kept very much the same, down to the dialogue. What does it say about our society that the main premise of the story still holds up? Sure, Jane and Liz are pushing forty, but the fact that their mother is obsessed with marrying them off is, sadly, still believable. As is the fact that three of their daughters are still living at home even though they're adults. Just as people are getting married later these days, so are they living with their parents well beyond what used to be considered the norm. Thirty is the new twenty! And of course the neuroses, self-doubt, and poor communication that has been thwarting relationships for millennia still holds strong.

Although Eligible is entirely based on another book, one of the brilliant things about it is that it holds up on its own. Sittenfeld has updated the story so well, and makes it work so perfectly on its own, that nobody unfamiliar with the source material is going to scratch their heads and wonder about why something happened the way it did. Nothing happens here just because it had to in order to fit the original novel. So if you haven't read or watched Pride and Prejudice, you can still very much enjoy this book as the hilarious chick lit that it is. Understanding the original story, though, adds a dimension that for me was priceless.

Eligible is quite different from Curtis Sittenfeld's other books, which just goes to show how versatile she is as a writer. I loved both Prep and American Wife, both of which are a bit more serious than this. I'm sure some will bristle at my calling Eligible chick lit, but that's what it is - a light-hearted, funny book about modern womanhood - and there's nothing wrong with that.

Eligible is part of the Austen Project, a series of updated versions of Jane Austen's novels. From what I've heard it's the best one so far. The others are Sense and Sensibility by Joanna Trollope, Northanger Abbey by Val McDermid, and Emma by Alexander McCall Smith. Have you read any of them? Will you read Eligible?
Posted by 3goodrats at 7:30 AM