The Knife of Never Letting Go

The Knife of Never Letting Go by Patrick Ness (2008) 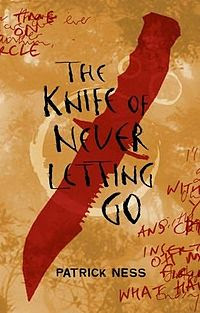 In Prentisstown, there are no women. They were killed off by a virus which had less serious, but very strange, effects on men - their thoughts are all completely audible. They try to control their Noise, but it's still very difficult to keep secrets in this strange new world. Todd Hewitt is the last boy in this city of men, and in just one more month he, too, will be a man. For now he's alone with no friends, except for his dog Manchee, who is the only one who ever talks to him, but has little of importance to say. But one day as Todd and Manchee are exploring the swamp outside town they come across a very strange spot where there is a marked absence of Noise. Could it be a leftover Spackle, one of the aliens that were supposedly all killed off during the war? Or is it something even more surprising? In this first installment of the much-lauded Chaos Walking series, we follow Todd on an action-packed journey of discovery as he uncovers the truth about his world while trying to save his own life.

The world in this novel is strange and scary, as with any dystopia, but I especially liked the element of Noise, and the way people tried to control their thoughts so as not to give away their secrets. Having the animals talk made it very humorous and I think my favorite character in the book was Manchee. (He reminded me of the dog in the movie Up, who is hiding under your porch because he loves you.)

The story was very fast-paced and I flew through it. Something would happen very quickly --

Todd barely had time to --

And before he knew it --

Something came crashing down --

You get the idea. It makes for exciting reading and it's difficult to put down, but it kind of exhausted me.

Usually there is some sort of resolution at the end of a book, even if it's a series and you know the whole thing isn't actually over. Not here - there is no rest after this journey and although I did start on the second installment right away, I just can't keep up this pace. I'm not as young as I used to be.

If you like young adult dystopias, you really shouldn't miss this one. Grab all three volumes, turn your phone off, and immerse yourself in Patrick Ness's world for a weekend this winter.
Posted by 3goodrats at 2:34 PM

excellent read, I borrowed it from my daughter and devoured all three over the summer holiday - I am always on the look out for good teen reads (6th form college library, that's 16+) - Have you tried Hunger Games?

Yes, I loved Hunger Games! In fact someone recommended this series to me because of it. Another series I like to recommend if you like dystopias is the Scott Westerfeld series that begins with the book Uglies.