All Wound Up: the Yarn Yarlot Writes for a Spin by Stephanie Pearl-McPhee (2011) 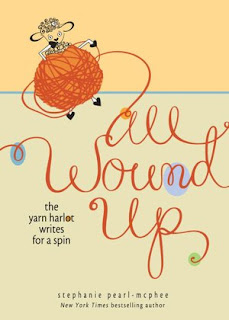 This collection of humorous essays about knitting is the latest from the Yarn Harlot, an expert knitter and ridiculously hilarious writer. (She's very funny in person too!) You'd think she would run out of fodder, but no, she has plenty to say on knitting-related subjects and this book is just as funny as her others.

As a knitter she makes me feel validated. She freely admits that gauge swatches lie, a truth most knitters won't admit to as we continue to insist on the importance of swatching. (And it is important, just not foolproof.) She acknowledges that we knit garments very different from what's in our regular wardrobe in hopes the "beauty of what we have made will be miraculously transferred to us." And when non-knitters question why we put so much time, money, and effort into things we could buy quickly and cheaply at a store, she compares knitting to great works of art, specifically the Sistine Chapel. It's not efficient, but it adds beauty and value to our lives.

It's not all light-hearted humor though. In her essay "Fair Trade" she talks about spending months crocheting a lace tablecloth and how difficult and time-consuming it was, and then seeing crocheted tablecloths in Chinatown for $60. Since it's not possible for crochet to be done by machine, they must all be crocheted with the workers paid very little for their monumental efforts. In another serious essay, "The Time of the Big Not Knitting" she talks about a difficult period she went through last year during which she was so upset she could not knit. This was the first time that had ever happened and she has been knitting since she was four. (Four!)

Not all the essays are even about knitting, exactly. One of my favorites was "Ode to a Washer: A Love Story in Three Parts." Parts of this story about her beloved Sir Washie appeared on her blog while it was happening and it was hilarious. It's even better now, polished into a complete essay.

This would have been best read in pieces, between other reading, so I could savor each essay before going on to the next. But I read it straight through anyhow, because it was just so easy to read, and damned funny.
Posted by 3goodrats at 9:27 PM

I LOVED this book. Like you, I read it pretty much straight through, but the wit of the essays is much appreciated in smaller chunks.

Sir Washie will always be remembered. :)