Moonwalking with Einstein: the Art and Science of Remembering Everything by Joshua Foer (2011) 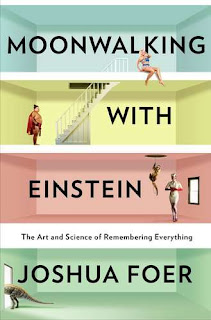 Journalist Josua Foer attended the 2005 U.S. Memory Championships for a story he was working on, and became so intrigued by the methods used by the contestants he not only embarked on a research project resulting in this book, but ended up participating in the Memory Championship himself. He interviews many of the big players on the memory circuit, as well as researching various aspects of memory including some unusual cases of superhuman memory and extreme memory impairment. Woven throughout the narrative are thoughts on the role of memory and how it has changed throughout history.
In many non-fiction books this tendency to visit related topics feels like tangential filler, but here Foer stays on track. The related topics really ARE related and they are fascinating. He explores the medical aspects of memory and the brain without going into too much biological detail, and interviews a man who can no longer form new memories as well as the man who was the inspiration for the movie "Rain Man" (and, by the way, was not autistic). He considers the importance of memory from days before the printed word, even observing that the writing that survives from that era (such as the works of Homer) uses repetitive phrases to make it easier to memorize, though that sort of repetition is frowned upon in literature today. He also discusses the decreased role of memorization in education, wondering if perhaps its complete elimination isn't such a great idea. And of course he reveals the methods used by the great memorizers in enough detail that the reader can try it out.
As someone who can't remember a damn thing (and relies on an extensive system of post-it notes and emails to myself) I found everything about this book fascinating. Foer points out that it's a lot of work to remember what is essentially useless information (strings of random numbers, for instance) - and doesn't help with more important questions, like where he left his car keys - but the methods are valuable for a lot of everyday things like passwords and phone numbers, and even information about people's birthdays, hobbies, and other pertinent cocktail party/networking information. It's not a long book (around 270 pages) but he manages to pack in a ton of fascinating information and anecdotes, in a tightly woven narrative that is wonderfully readable.
Posted by 3goodrats at 7:32 PM