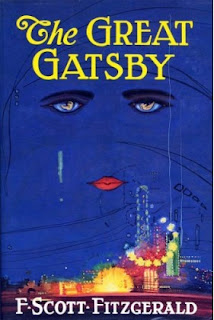 The first time I read The Great Gatsby was in high school, as part of a project on the Lost Generation for which I also read Hemingway's The Sun Also Rises. I always remember that project because it was so different from all my other work - the teacher assigned each student a book (or two) based on what he knew of our personalities and interests. It was a very fun assignment and I really enjoyed both books. Twenty years later, however, I remembered little of the content. Time for a refresher!

Jay Gatsby is an almost mythical man. He owns a large mansion in West Egg, on Long Island, and throws lavish parties. Nobody really knows where he came from or how he obtained such wealth. Some say he once killed a man. Nothing about him is certain, except that he once loved a woman named Daisy.

The narrator of the novel, Nick Carraway, has rented a house next door to Gatsby. Coincidentally, his cousin is Daisy Buchanan. Daisy and Tom live across the bay in the even more posh East Egg. They have a young child, though their marriage is strained as Tom has a mistress. She is Myrtle Wilson who lives with her husband George in an area called the Valley of Ashes. George is Tom's mechanic.

When Gatsby learns that Nick is acquainted with Daisy he implores Nick to help him try to get Daisy back. It's pretty much a setup for a mess, with Jay Gatsby is at the center, and of course it ends tragically.

The narrative is unusual, told from the perspective of someone who is not a main character, but that is one of its great strengths. Nick isn't exactly on anyone's side, nor does he really want to be involved in the complicated relationship issues at all. (At times I expect he deeply regretted his decision to go East that summer.) The other characters came off as pretty self-centered and materialistic for the most part, but still rather fascinating. It's a short novel, so it rather feels like a rowdy group of strangers has whooshed in with their fancy cars and bootlegged gin and just as you think you're getting to know them, they make some stupid mistakes, hearts are broken, bodies are left maimed in the street, and the rest of the group has flitted on to another neighborhood somewhere.

I wish I could remember my impressions of this book as a teenager, because I'm sure it's very different than those I had reading it as an adult. I suspect that back then I was more taken with the lifestyles of the characters - their wealth and the lavish parties - than anything else. What strikes me now is the superficiality of it all, the importance of status in the characters' identities - at the expense of things that would have actually made them happy or given their lives meaning- and most sadly, how none of it meant anything in the end when the guy who was the center of so much attention had only a handful of people show up to his funeral.

There is a lot to this short novel, and in fact I got a little sidetracked the other night reading reviews and literary criticism about it. Now that I've rediscovered it I'm sure I'll read it again more than once and I'm curious to see how different the experience is each time.

Have you read this classic? Do you love it? Hate it? And why?

I read it in college for my Twentieth Century American Novels class. I re-read it in graduate school for comps exams. In spite of not having read it in so long some of the language still haunts me. It's a fascinating exploration of what being American is or can mean.