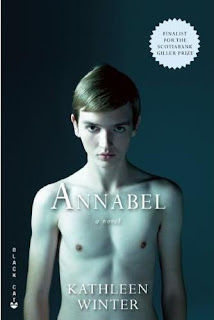 In the late 60s a woman gives birth to an intersex baby in Labrador Canada. Aside from the parents, Jacinta and Treadway Blake, the only person who knows about the strange child is their neighbor and midwife, Thomasina. Both women doubt Treadway's decision to raise the baby as a boy, but realizing the impracticality of raising a child as both boy and girl, they go along with the idea. Soon after Wayne's birth, Thomasina's husband and daughter are drowned while canoeing, and ever afterward she secretly calls Wayne Annabel after her lost daughter. Wayne knows he has a medical condition requiring a great deal of medication, but doesn't understand the truth about himself until he is almost a teenager. Eventually he must decide whether to continue taking hormones and living as a man or discontinue them and allow his true self to emerge.

Treadway encourages all things masculine in Wayne, and tries to discourage his friendship with a neighborhood girl named Wally Michelin. Wayne and Wally built a hideaway on a bridge, decorating it ornately, and spend hours there, Wally with her music and Wayne reading and admiring the postcards Thomasina sends him from Europe. But Treadway wants Wayne to build forts like "normal" young boys and destroys the bridge and everything in it. When Wayne becomes obsessed with synchronized swimming, Treadway gets his friends to perform a synchronized routine with their backhoes. Wayne was not impressed, but I found it rather touching that Treadway arranged this for him.

Wayne seems such a beautiful and vulnerable person, who is only trying to understand himself. He is patient with his father and doesn't get angry even when he is mistreated. There is beauty in Treadway as well. A trapper, he spends much of the year out on his trapline in the wilderness and intimately understands the land of Labrador. As he spends more and more time on his trapline, it was as though he became almost like a wild animal himself. Not in a vicious way, but in a quiet connected-to-the-land way. Indeed, he is quiet by nature and does not tell his family how he feels, though he feels keenly. Jacinta is more talkative, and more inclined to nurture Wayne's feminine side, but usually defers to her husband. She is not from Labrador and frequently dreams of returning to St. John's but knows that too much has changed since her life was there.

I loved many things about this book and was completely engrossed in it until I finished. It's a great story with characters I became very invested in and cared about, and the setting was unusual and fascinating. Labrador seems like the area in Maine where I grew up, only more so. It's a harsh landscape full of rugged individuals who know how to take care of themselves. I loved all the details, especially the ones about food (they ate strange-sounding things like duck jelly and bottled rabbit!) Everything about this beautiful, unusual novel is pretty wonderful.
Posted by 3goodrats at 8:11 PM