The Train to Lo Wu 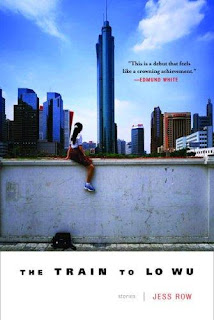 I came across this little gem while looking for books for a patron. I don't remember now where she was going, but I consulted Nancy Pearl's Book Lust To Go for suggestions of books that take place in a particular country. After the patron left, I looked up Hong Kong - my next destination - and found this suggestion. Jess Row spent a couple of years teaching English in Hong Kong just after it was handed back to China, and this unique time and perspective were captured beautifully in these seven stories.

Most of the stories were about people who were newcomers to Hong Kong, or there temporarily. I think my favorite of the collection is "The American Girl," in which an American graduate student visits a blind man regularly and reads to him. She is doing research on how people adapt to change after surviving trauma, and eventually gets the man to open up long-buried memories. The opening passage of the story was a striking description of his impressions of being on a moving train as a young boy.

The other stories were very good as well. In "Heaven Lake" a widower raising two daughters remembers his time at Columbia University when he worked part-time for a Chinese delivery service and was accidentally drawn into a violent crime. "For You" was about an American couple whose temporary move to Hong Kong began to seem more permanent, leaving the husband feeling as though his life is permanently on hold. In the title story, two people from opposite sides of the border - China and Hong Kong - try to navigate what appears to be a doomed relationship.

I don't frequently read short stories. Their compactness somehow implies that they are more significant and I can't help feeling that I'm missing what is important about them. I may be missing some importance in these stories, but I very much enjoyed reading them. The writing is simple and clean, giving the stories a quiet feel despite the turmoil experienced by many of the characters. Some of the imagery was quite powerful, and I suspect I'll think back on these stories a month from now when I am myself in Hong Kong.
Posted by 3goodrats at 9:56 PM