The Hottest Dishes of the Tartar Cuisine

The Hottest Dishes of the Tartar Cuisine by Alina Bronsky (2011) 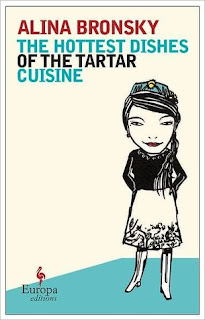 When Rosa learns that her teenage daughter, Sulfia, is pregnant, she tries everything she can think of to end the pregnancy. But when baby Aminat is eventually born, Rosa is instantly smitten.  She thinks little of Sulfia, though, always complaining that she is stupid and not fit to be a mother. Now Rosa is scheming to get Sulfia married off and keep Aminat for herself, initiating a lifelong game of tug-of-war. As conditions in Russia deteriorate, Rosa becomes more and more determined that she and Aminat must live in the West, with or without Sulfia, and at any cost necessary. The cost is great indeed.

Rosa is one of the best characters I've come across in fiction in quite a while. She is self-centered, over-confident, and cruel. Some of her behavior is truly horrific - she does everything in her power to marry Sulfia off (several times) but at one point intentionally breaks up Sulfia's marriage for her own selfish reasons, with the result that Sulfia is not only divorced, but is living in a different country than her daughter Lena, and will never see her again. (And then is insensitive enough to say one day "Sulfia, you need a man.") Desperate to get them all out of Russia she practically sells Aminat to a German pedophile to get him to marry Sulfia.

I didn't know whether to laugh or cry. And that's the thing about this book - it's written with so much humor, you almost can't help but laugh at Rosa's antics and the bizarre lens through which she looks at the world. At her mildest, she is an eccentric middle-aged woman who is always bragging about her skills: "I had a way with puff pastry, as with so many other things" or "I was the perfect spouse." But when something terrible happened and she just picked up and kept going, her cold-heartedness became more apparent and even scary. This was her reaction when her husband left her: "Apparently there are women who break into tears at such news. Their legs buckle and they sink to the tiled floor of the kitchen, with its checkerboard pattern, and other people must step over them in order to get to the refrigerator. I wasn't one of those women." And so begins the parade of men in and out of her bedroom.

As awful as she was, she was one tough and resourceful lady, frequently taking the initiative to solve problems for those around her. When she became a cleaning lady, rather than feeling like it was a big step down in her career, she only remarked on how those families would never have gotten by without her to take care of them, because clearly they couldn't handle it themselves. She also takes it upon herself to learn to ride a bike, drive a car, and ski. Rosa harbors no fear or self-doubt whatsoever!

I read a review in which Rosa was described as an unreliable narrator. Although she doesn't fit the term as I usually think of it, the description is rather apt. Rosa has a narrow view on everything and in her mind is always working towards a specific goal that she feels is for the best, and insists that everything is fine if she says it is. Meanwhile, the reader can see her family's lives falling apart in her wake. She claims to always be acting in the best interests of Sulfia and Aminat, even as she destroys both of their lives bit by bit. But she's not completely blind to what is going on around her; a couple of times she comes out and says that she chooses not to understand certain things.

Although it made it onto several "Best of 2011" lists, this novel never achieved the popularity that it deserves. There's a lot to talk about, and many fantastic quotes (I've dog-eared the hell out of my library copy), but I've already gone on enough about it here. Just get a copy for yourself and read it as soon as possible. If you like Eastern European themed fiction, dark humor, or quirky characters then you're sure to enjoy it.
Posted by 3goodrats at 3:53 PM