The Descendants by Kaui Hart Hemmings (2007) 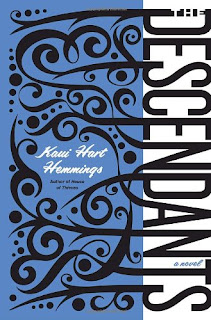 Matt King's wife Joanie is in a coma following a boating accident. He is trying to step up to the plate in parenthood and see his two daughters through the difficult time, but he just doesn't know how to relate to them. The situation is further complicated when he learns that his wife had been having an affair, and Matt is understandably compelled to find out who the guy is and track him down.

Meanwhile, he has a tough decision to make. His family, who has lived on Hawaii for many generations and is descended from royalty, owns a huge parcel of land. They are in the midst of making a decision about selling it and Matt has the largest vote in the matter, so a lot is riding on him.

I saw the movie based on this book just a few days before I began reading. I apologize for the constant comparisons between the book and movie - I'm having a hard time separating the two!

Throughout the novel I pictured the characters as the actors from the movie, which is great since I thought it was very well cast. Aside from that, the book was better. There's just a lot going on in Matt's head, and his internal narration - which of course is missing from the movie - was one of my favorite aspects of the book. His observations are unflinchingly honest and don't always flatter him. Many of his thoughts are the sort you might be uncomfortable admitting, and at times I related, and was grateful someone else felt the same (even if he's a fictional character.)

Scottie, at ten years old, is precocious and quirky, still a child but quickly approaching adolescence and occasionally getting ahead of herself. Eighteen-year-old Alex has left behind a history of drugs and is pulling herself together though her parents haven't noticed since they sent her away to boarding school. She is strangely dependent on her seemingly dull-witted friend Sid, who Matt instantly dislikes. Sid was probably my favorite character of all, an outsider who suddenly appeared during the most difficult time the family has faced. At various times he acts as a buffer, an observer, an objective bystander. There is more about Sid in the novel than the movie, as well as a more fleshed-out background of Matt's relationship with his wife and daughters.

We knew almost nothing of the sort of person Matt's wife was before in her accident in the movie version, but in the novel she was a more complete character. Matt thought a lot about his conflicting feelings towards her and reflected a great deal on their rocky marriage, and through these reflections the reader gets to know her. Joanie was a model, an alcoholic, and from what I could tell, not a particularly nice person. I didn't know enough to care about her one way or another in the movie, but in the book I distinctively disliked her.

But it doesn't matter, because the point is that you care about the rest of the family. In both the film and novel I couldn't help but want everything to turn out ok for Matt and his daughters, and I feel pretty confident they will. Whether or not you've seen the movie, this is a book well worth checking out.
Posted by 3goodrats at 10:01 PM