The Future of Us

The Future of Us by Jay Asher and Carolyn Mackler (2011) 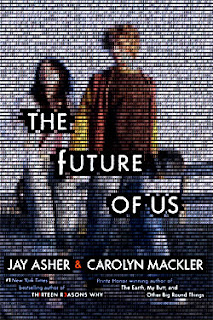 It's 1996 and Emma has just set up her new computer when her friend and neighbor Josh comes over with an AOL CD for her. Later when she loads the disc, a site called Facebook pops up and Emma sees a thirty-something woman named Emma Nelson Jones who looks a whole lot like her. Josh is on the site too and his information says that he is married to Sydney Mills, who is the most popular girl in school and has never even spoken to him. At first thinking it's a prank website, Emma and Josh are soon convinced that it's a window to their futures. And those futures appear to change based on actions they take now. Emma keeps deliberately trying to prevent what she sees as her future unhappiness, while Josh wants to keep his seemingly perfect future life as he first saw it.

What a great premise for a book! If you could see what your future is like, what kinds of changes would you make to your life now? Would you make decisions that feel wrong because you think it will get you to the right place later? There are so many questions, and it was fun to experience it all along with Emma and Josh.

But Facebook isn't the only thing causing angst in their lives. A few months ago, Josh misread some signals and thought Emma wanted to move their relationship beyond friendship. She didn't. Awkward! So although they remain friends, there's a lot of tension between them, which increases as they navigate their dating lives.

This is a perfect crossover book, as adults who remember the 90s will appreciate many of the references. There's a some speculation that Ellen Degeneres might be gay, not to mention frequent use of pay phones. Observing Emma and Josh read status updates is hilarious as they wonder what a blog is, or the time someone says they miss Pluto, and they both wonder "What happened to Pluto? Did it get hit by a meteor?"

The writing was a bit awkward in places, with some stilted conversations that just didn't feel real. Emma also once used the phrase "baby bump" in 1996, though that phrase didn't come into use until the mid-00's. But mostly it was a fun ride with many interesting questions and a good ending. Like Facebook itself, this book was hard to close when real life beckoned.
Posted by 3goodrats at 9:59 AM