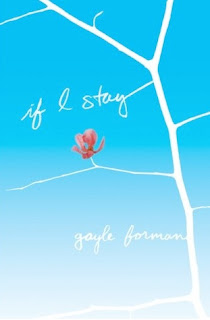 Seventeen-year-old Mia has a rising rock star for a boyfriend, hipster rock-music-loving parents, a little brother who she adores, and is awaiting possible acceptance to Juilliard where she hopes to continue playing the cello. But then, in an instant, everything changes. Her family is gone and Mia lies in the hospital in a coma. Separated from her body, she watches herself in the hospital, observes the friends and family who come to visit her, and reflects on her charmed life, now ruined. Will she ever wake up? Does she even want to?

In Mia's rock-loving family, playing the cello is almost rebellious, but her dedication to music comes through vividly. Before the accident Mia struggled with the decision to move far away to music school leaving behind her family and her boyfriend Adam. Only friends and family are important enough to compete with Mia's love for music, and as she lay in the coma she weighed the loss of her family against her living grandparents, friends, and future musical career.

With this premise, the book could easily have been melodramatic, but it's not at all. Mia was very close to her family and the loss is just staggering, but the author manages to capture it in a way that makes it completely heartwrenching while keeping it real. Many authors would not be able to do this story justice, but Forman handles it deftly and beautifully.

If I Stay is under 200 pages and is a breeze to read, despite its serious themes. The vivid images - of her dad in his bow-tie smoking a pipe, the accident scene, Mia playing Adam's body like a cello - will stick with you long after you've turned the final page. I'd normally be wary of the sequel to such a book, but Where She Went has gotten rave reviews, I think more than this first book, so I've already begun listening to the audio. I'll be posting a review soon!
Posted by 3goodrats at 9:14 PM