The Lifeboat by Charlotte Rogan (2012) 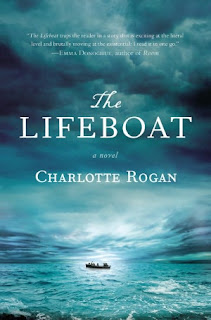 I recently attended the Public Library Association Conference in Philadelphia (and hopefully will share more about that with you soon). One of the sessions I attended was on debut authors, and I got a free copy of each of the four authors' books. It was really enjoyable listening to them talk about their books, which all sounded very interesting. I don't usually try to get free books at conferences because I have enough books I want to read without adding to the list, but I was very happy to bring all of these home with me.

Charlotte Rogan, author of The Lifeboat, didn't begin writing until in her mid-30s and says she has a whole drawer full of manuscripts. Her break came when she was being interviewed for an article on sending multiples to college (oh yeah, she was doing all this writing while raising triplets!) The journalist interviewing her ended up introducing her to an agent, and now we all get to read The Lifeboat. You will be as grateful as I am when it comes out on April 9 and you can finally read it.

The protagonist, Grace Winter, had only been married for about 4 weeks when the ship on which she and her husband were traveling went down. Grace was lucky enough to get a place in a lifeboat (or perhaps her husband paid a bribe, we'll never know for sure) though she did not see what became of Henry. There were 38 people on the lifeboat and although it was intended for 40 people, it was clearly too crowded. Of course they thought they'd be rescued right away and it wouldn't matter. In the end they were on the lifeboat for three weeks before the remaining survivors were rescued, after which Grace found herself on trial for murder. The novel is filled with ethical questions about survival and what constitutes murder in extreme situations, and whether it's justifiable to kill one person to save many.

During her time on the lifeboat Grace had plenty of time for thought, and the reader learns a great deal about her early life and relationship with Henry. Grace is much more complex, and less morally absolute, than at first we may believe. She is also rather admirable with her sensible way of looking at her situation and her strong ability to reason.

There were some wonderful passages that captured Grace's observations in a way that felt so realistic it was like I was on the boat myself. A change in the weather could affect her entire outlook, a cold breeze on a clear morning making her feel settled and less afraid. Her thoughts about the interpersonal relationships with the other occupants of the boat added depth and complexity to the situation.

I was captivated from the very first page. This is an exciting story with relatable and imperfect characters, and I think it will appeal to a wide audience. There is much fodder for discussion, making this an ideal choice for book groups. I predict this book will be popular, and deservedly so.
Posted by 3goodrats at 8:52 AM