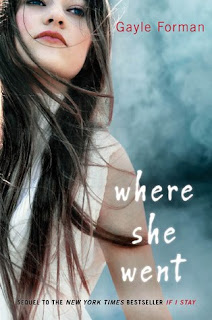 This book is the sequel to If I Stay and therefore contains pretty major spoilers.

Three years after Mia's accident she is playing the cello in Carnegie Hall. Adam, whose band Shooting Star shot to fame after he and Mia broke up, is getting ready to fly to London for a tour. But letting his band go ahead without him, he's staying an extra night in New York where, on impulse, he buys a ticket to Mia's performance. A lot has been left unsaid between them, so when they meet for the first time in almost three years, emotions run high and Adam's night in New York is a very long night indeed, full of anger, doubt, and finally hope for the future. Told from Adam's point of view, the short novel spans just a 24-hour period (much like it's predecessor) but this time it's a very different story.

There are lots of flashbacks to the time between when the two books take place, as well as some from before Mia's accident. Since this book is focused on Adam we don't know a lot about Mia's life since the accident but we learn a lot about Adam's end of the breakup with Mia, his subsequent rise to fame, his relationship with his current girlfriend, and problems within his band. He has a lot of unresolved feelings about Mia and together with his uncertain career plans, I found him a wonderfully complicated and compelling character to spend time with.

I listened to the audio and perhaps I would have loved it a teensy bit more had I read the print version. As I have mentioned before I dislike male narrators reading female voices, but since this book is from Adam's point of view, a male narrator was necessary. He was good too, just not...female.

This book received many great reviews, though I'm not sure if I think they are warranted. It didn't have the emotional impact of the first book for me, but I still found the relationship between Adam and Mia compelling. And in a way I feel this book was necessary to complete the story, an aspect of it that I found very satisfying. The writing was really nice as in the first book and I will definitely keep my eye out for more books from this author.
Posted by 3goodrats at 8:00 AM

Labels: 2012 end of the world reading challenge, books, gayle forman, if i stay, reviews, where she went, YA, young adult