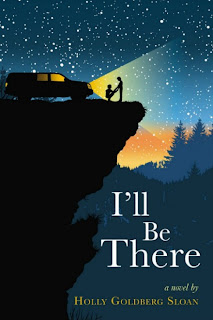 Sam and Riddle have lived in a lot of places, they don't go to school, and they are afraid of their emotionally unstable father, Clarence. Sam sometimes goes to churches to get away and be alone and one day he is drawn by the music to a church where a young woman is singing terribly, but staring at Sam the whole time. He meets her only briefly, but can't forget about her. Emily keeps looking for the mysterious young man from church who she can't get out of her mind. When they reconnect, Emily's whole family becomes attached to Sam and Riddle, but inevitably Clarence suddenly decides that once again it's time to skip town, taking the boys with him. Told in alternating chapters from Emily's and Sam's perspectives, this was a well-told and - dare I say it? heartwarming - story about fate, family, and friendship.

There is much to love about this book, but I especially liked how the lives of the main characters were so incredibly different from each other, and they kept feeling thrust into unfamiliar worlds. Sam and Riddle were poor, without a real home, and their only family was their abusive father. Visiting Emily's regular middle-class household was just amazing and luxurious to them. Similarly, Emily went to dinner at the local Country Club with Bobby Ellis, a boy who liked her much more than she liked him, and she felt completely out of her element around these people who dressed up for dinner and were disappointed that they no longer had lobster tails at the Country Club, a delicacy Emily had never in her life eaten. Bobby, of course, had no idea that this was all new to Emily, just as she didn't realize how her life felt to Sam and Riddle.

Until near the end I thought that Riddle was 7 or 8 years old, and was surprised when I saw that he was twelve. Emily also came across younger than her years; her chapters were written very simplistically, reminding me of a long-ago style like Nancy Drew or the Betsy-Tacy books. She definitely had some complicated emotions, but everything was expressed in simple, somewhat formal, sentences. Whether or not this was intentional, it's quite a contrast from the chatty tones used in most young adult novels. I'm still unsure how I feel about it.

The story was very good, and there's much more to it then I've described here, but I really think you should all read it for yourselves. This is an incredibly compelling novel with a lot going on, yet is very quick to read. It is quite poignant, with many heartfelt moments and a satisfying, if not quite believable, ending.
Posted by 3goodrats at 8:00 AM