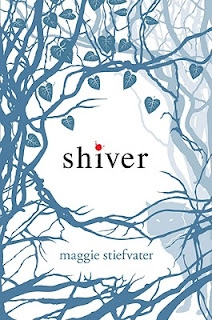 When she was a child Grace survived a wolf attack, and since then has been obsessed with the wolves that live in the woods behind her house. There is one wolf in particular with whom she feels a kinship, a wolf that appears in her back yard every year on Christmas. But when one of her high school peers is killed by the wolves, she suddenly fears for their safety, convinced that "her" wolf was not to blame. Around this time she meets Sam, a boy with yellow eyes, and immediately recognizes him as the wolf with whom she is so familiar. Sam and Grace are strongly drawn to each other, but as Sam explains about the wolves and the pattern of turning from wolf to human to wolf again, they both begin marking the dwindling amount of time they have left together.

The tone of the novel is serious and heavy, without a trace of humor, and a bit otherworldly, like a dark fairy tale. The relationship between Sam and Grace was fantastically crafted, with all the anticipation, tension, and longing that go into any great romance. I kind of liked the wolf theme of the story, but it was their romance that clinched it for me.

There are very few faults with this book. Sam is very swoonworthy, and though his poetry/song lyrics are embarrassingly bad I suppose they are typically adolescent, so it's appropriate. Grace's absentee parents were a little unrealistic, but....so are werewolves. It was believable in the context.

The audiobook had two narrators; one for chapters narrated by Grace, and one for chapters narrated by Sam. The female narrator was exceptional. The male narrator was good, though he put heavy emphasis on certain words that made it sound a little awkward. But luckily this didn't diminish Sam as a character at all. In general the audio is quite well done and that's how I'm planning to continue the series.

I didn't expect to like this book. Although I heard great reviews I thought it was going to be a fairytale retelling, which isn't my sort of thing (and which it is not). Even when I started listening to the audiobook I wasn't so sure I was going to like it, but I slowly became more involved in the story and now there's just no question of not continuing with the sequel.
Posted by 3goodrats at 9:07 PM