The Age of Miracles

The Age of Miracles by Karen Thompson Walker (2012) 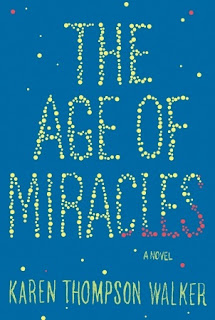 Inexplicably, the Earth's rotation began to slow. As the days got longer, the tides got higher, the weather changed, birds began to die, relationships suffered. "But," says our protagonist Julia, "no force on earth could slow the forward march of sixth grade."

Eleven-year-old Julia has a lot to contend with. The environmental calamities are almost more than she can comprehend, and she now lives in a strange society in which people on "clock time" are at odds with those attempting to remain in sync with the rising and setting of the sun. On top of all that are the bullies at the bus stop, her suddenly tenuous friendships, and the boy she has a crush on but doesn't know how to talk to.

"The slowing" and its effects are fascinating and scary and create powerful imagery, such as beach houses missing entire walls to expose contents encrusted with barnacles and anemones. But the everyday struggles are, of course, what makes it personal and relatable. Families become ripped apart when someone decides to leave for a "real time" colony, people begin building bunkers and hoarding supplies, impulsiveness becomes rampant as part of the new gravity sickness. Then there are the challenges that may have nothing to do with the disaster - the strain in Julia's parents marriage, for instance, and Julia's changing friendships. Maybe it's from the stress of the situation, but maybe it's just part of middle school. One of my favorite scenes was when Julia skipped soccer practice to go buy a bra, beautiful in the store but cheap and ill-fitting when she got home. How small the disappointment in comparison to the loss of entire species of animals, but how important to the life of one sixth-grader!

Similar to Tom Perrotta's The Leftovers, this novel focused a lot on the reaction to disaster, the continuation on with normal life in a world that is suddenly uncertain. But of course that was a one-time event and this is an ongoing catastrophe, more similar to Life As We Knew It - and if you like either of those books, you will probably like this one.

Although not considered YA, The Age of Miracles reads like a young adult novel - fast-paced with a simple, straight-forward writing style. Combined with the compelling story, it was incredibly quick to read. I don't remember when I last read a book in a day. There's good reason why this book is such a hit right now - go get yourself a copy immediately!
Posted by 3goodrats at 8:00 AM