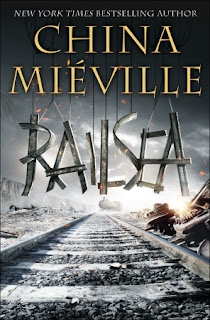 Sham Yes ap Soorap is a doctor's assistant aboard the moletrain Medes, traveling the rails in search of the moldywarpe named Mocker-Jack. Instead they come across a wrecked train in which Sham finds several pictures that set him on a hunt of a different kind. As he searches for something that should be impossible to exist, he encounters monsters, pirates, and - most dangerous of all - the truth about the railsea.

Though I've been curious about China Miéville for a long time, this is the book I ended up choosing for one reason above all: giant naked mole rats. I was not disappointed. The naked mole rat is not a pretty animal; in the form of a giant, burrowing through the ground and heading toward the train you are riding, it would be truly monstrous. Between the giant rats and the sea of railroads, Railsea contained some of the best imagery I've come across in a while. I really want this to be a movie.

Apparently, there are echoes of Moby-Dick here, in the determination of Captain Naphi to hunt down the mole that bit off her arm. Having never read Moby-Dick, I can't speak to this comparison or the extent of the Moby-Dick theme, but it comes up in most reviews.

Audio probably wasn't the best choice for me for this book. Aside from being distracted a number of times (through no fault of the great narrator, Jonathan Cowley), I didn't realize until reading reviews afterward that the book contains drawings. Also, several reviews mentioned heavy use of ampersands in the text, which may have added something stylistically which I missed in the audio version.

The story was good, if a little slow at times, but the best part was the world-building.  I wanted to learn more and more about the world Miéville created, and I hope there will be a sequel because I see a lot more adventure in Sham's future and I want to learn more about his world and its people.

I also want to read more by China Miéville. Perdido Street Station has been on my radar for a long time and I've avoided it because of its length. Starting with a young adult novel was probably a good choice, but now that I've gotten a good taste of Miéville and his talent, I think that novel may drift higher in my queue.
Posted by 3goodrats at 8:00 AM