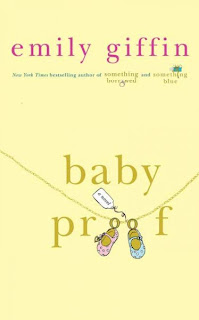 Claudia and Ben are the perfect couple - not only are they completely in love, but they both agree that they don't want to have children and each feels incredibly glad to have found a mate compatible in this most important way. Until one of them changes their mind. What do you do when the very foundation of your relationship suddenly changes? And how much are you willing to compromise for love?

I am always a little skeptical of books about The Most Perfect True Love of All Time because I am nothing if not a cynic about romance, but then again this is chick lit and the ridiculousness of that genre is also what I love about it. Chick lit can be rather hit-or-miss, but I've listened to three of Emily Giffin's other books on audio, and liked them all. She is not only consistent, but has a talent for making you like characters who are doing things you strongly disapprove of. Particularly appealing about Emily Giffin's writing is that she adds minor characters who were major characters in other books. Here too, were two major players just mentioned off-handedly a couple of times (though one had a profound impact on the plot.)

There are certain issues that I don't especially like reading about because I hold positions about which I feel, shall we say, a little sensitive. Not so much in real life, but just in books. Like, I'll talk about animal rights with people and feel totally comfortable, but I really put off reading Before You Know Kindness because I was afraid it would make me angry. So too with this book - I sort of dreaded it because of the main plot point. I am absolutely totally comfortable with being a child-free person and am fine talking to people about it, but nothing irks me more than a character in a book who is staunchly child-free until they realize that in fact they are just AFRAID of having children or have issues with their own mother and once they get past this they will totally change their minds and start producing offspring immediately. Obviously there are people for whom this is true, but can't there be a character who simply doesn't want to be a parent the way someone else simply doesn't want to be an accountant or an Evangelical Christian?

Anyhow (see how this kind of thing puts me on a tangent?) I am happy to report that as tense as I got during the course of this book, ultimately it did not make me angry. Say what you want about chick lit, but there are subtleties and nuances here that really do justice to an issue that could easily have been oversimplified.

Somehow it wasn't quite as good as her other books that I've read, but it was still a good bit of fun. I'll definitely continue reading her stuff, though I'll probably go back to the audio since I've had such good experiences with her novels in that format. I do love some chick lit in the summertime.
Posted by 3goodrats at 7:17 PM