The Game of Kings 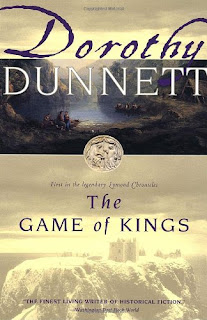 In 16th century Scotland a man exiled for committing treason has returned to his native soil. Francis Crawford of Lymond, the younger son of the Crawfords of Culter, is educated and multi-lingual, charismatic and witty, and has formed a band of mercenaries wreaking havoc all over the countryside even as Scotland braces itself for attacks from the English. Lymond seeks three men who he thinks may have information about the crimes he is accused of committing, but finding them proves difficult because of the political climate and his disadvantaged position. A large cast of characters and complicated story lines make this first book of the Lymond Chronicles difficult, yet satisfying, reading.

This was the most dense and complex story I've read in a while, and it took me a surprisingly long time to read. I'm very weak on Scottish history, despite studying it during a semester abroad at Glasgow University, but as with many aspects of this book it's mostly important to just get the gist of it. This is lucky for me, because throughout the novel I felt a little lost, but although I know I missed some things I know I got the main points and was able to enjoy the characters and the story.

This may sound suspiciously like I didn't like it, but really I did. There were great descriptions and conversations and relationships and funny bits, including a fantastic scene in which a Gypsy performs a feat of alchemy for an audience of ladies, one of whom is a bit too smart to fall for his stunts. The sense of history is just so authentic here, and incredibly detailed and well thought out. As I mentioned, there's a lot I didn't exactly understand, and I'm a little awestruck at the feat this author accomplished. I definitely have a lot of appreciation for the novel, even if I didn't love it.

This is just the first in a series and though I find the story interesting, I'm unlikely to read more of them. What I'd love though, is to watch it as a series. I'm surprised it hasn't been adapted by BBC already, or HBO, which I'm sure could also do a great job. The imagery of the setting would translate well to the screen (many times I pictured it all happening as though I were watching it onscreen), and there are plenty of colorful and complicated characters who would have wide appeal. I'm sure Dunnett's legions of fans disagree with me, but they are just better people than I to have the fortitude to make it through the whole series.

(I won my copy of the book from a contest over at Shelf Love, a really fantastic book blog.)
Posted by 3goodrats at 8:30 AM