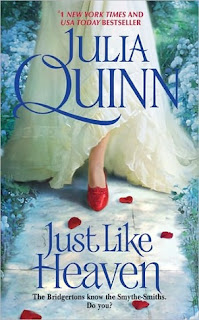 I have long felt like I've neglected the entire romance genre and as a librarian, I should probably be a little more familiar with it.

Also, I really felt like reading a trashy romance.

But you know - this book turned out to be much better than expected. I'm such a sucker for historical romances anyhow - for example, I've watched Pride & Prejudice more times than I can count and many of the novels I love revolve around love stories. When I think of romance as a genre though, I assume it's stereotypical and formulaic and boring. Apparently, that's not necessarily the case.

Anyhow, the novel. Our heroine, Honoria Smythe-Smith is going into her third season without so far securing a husband. She is becoming desperate. When she runs into family friend Marcus Holroyd under unusual circumstances, they are suddenly thrown together in a crisis situation and before they know it, sparks fly.

First of all, I love this cover. (I actually read this because of a review of the second book in the series, which also has a gorgeous cover.) I do love a lady in a pretty dress. But there is much to love inside the book too.

I was pleasantly surprised that this book and its characters have a sense of humor. Honoria's quartet has NO musical talent whatsoever and even Marcus finds listening to them to be torture, which provided a great deal of comic relief. The perspective shifts between Honor and Marcus, which makes it even more amusing when they realize their attraction to each other and become awkward. Honoria inwardly curses herself when she panics and curtsies at Marcus (curtsies!) and meanwhile, Marcus ruminates on how to properly court a woman ("Flowers? He'd seen other men with flowers. Women liked flowers. Hell, he liked flowers, too. Who didn't like flowers?") I think one of the turn-offs of that lone Harlequin romance I read as a teenager was that it took itself way too seriously. What a pleasant surprise this funny novel was!

Also, Honoria and Marcus shared a love of sweets that was quite endearing. There is a scene where she smuggles a tart into his sickroom and they eat the entire thing together, quickly before they are caught. A relationship based on a shared love of baked goods is one I can certainly relate to.

The story was a little sexier than I thought a Regency romance would be. There's a great scene in which Marcus is extremely ill in bed and Honoria is watching over him, and keeps becoming distracted by his muscular arms and bare chest. Then there is also actual sex, which took me a little by surprise. Not to spoil anything, but if sex would appear, I assumed it would be on their honeymoon. Clearly, I have a lot to learn about this genre. (Further research may be needed.)

This book was like candy. It didn't last very long, and it wasn't very deep or complex, but it's totally yummy and I could eat a whole bunch of them. And knowing how I am around candy, I probably will.
Posted by 3goodrats at 6:50 PM