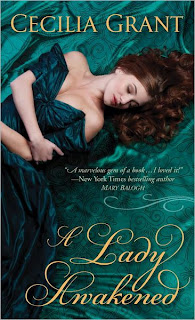 Hello and welcome to my new trashy romance blog. Bear with me; I'm sure it's just a phase.

Recently widowed, Martha Russell will lose her estate to her late husband's lecherous brother if she doesn't produce an heir quickly. Ever the shrewd business woman, she devises a plan to hire a neighboring ladies' man to secretly impregnate her. Stern, practical Martha refuses to take any pleasure in the task but as she develops a friendship with her hired stud, Mr. Mirkwood, it becomes more and more difficult to resist his charms.

For a romance novel, the premise of this story was a bit surprising. Usually the conventions of the genre require that there's no sex without commitment (or at least that's what I've heard from genre guides) but apparently things have changed. Not only is there sex without love from the earliest pages of this novel, but there's a hell of a lot of it.

What I liked most was the way her friendship with Theo Mirkwood developed. A London man at heart, he's been exiled to his family's Sussex estate because of his irresponsibility and now he must learn about things like land management. Mrs. Russell is interested in such subjects and during their afternoon sessions, sex is generally followed by discussions in which Martha teaches Theo about these subjects that he initially finds so boring. He is charmed by beauty and sexiness; she is interested in his growth as an estate manager.

Martha is an admirable character. Though she schemes to thwart the rightful succession of her husband's property, it's hard not to admire her sharp mind and kindness towards her tenants. She can certainly be a bit stubborn and stiff, finding it difficult to connect with people, but her heart is certainly in the right place.

I found the ending unnecessarily complicated and a bit cobbled together, but it still turned out the way it should. It's strange to read in a genre where you know how the book will end. Of course Martha and Theo will end up in love and will get married - but how exactly will they get there? That is the fun of the romance genre. I couldn't read these books all the time, but they are great for occasional fun summer fare.
Posted by 3goodrats at 11:00 AM