The Gathering Storm (The Katerina Trilogy #1) by Robin Bridges (2012) 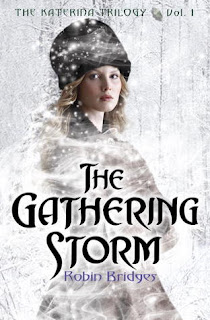 In 1880s Russia, a young duchess named Katiya tries to hide her secret power: she can raise the dead. But what she really wants to do is become a doctor so she can help the living. Unfortunately, this isn't in the cards for a young lady like her and she is forced to dress up and attend balls so she can find someone to marry. At the elite Smolny Institute one of her classmates is Elena, whose family members all have frightening powers. Even worse, Elena's brother Danilo is interested in Katiya and reels her in with his otherworldly charm. Katiya soon realizes there is much more at stake than her choice of a husband.

I had a couple of problems with this novel. First, I found it difficult to keep track of the characters because they all had titles, and it got confusing when someone was only referred to as "the grand duke," for instance. Also, the spelling of the names "Katiya" and Dariya" were odd, as they are usually spelled and pronounced "Katya" and "Darya." But those are fairly minor annoyances.

More importantly, I struggled to understand Katiya's motivations and fears sometimes. She could be downright dull-witted. She didn't want to speak of vampires or supernatural occurrences for fear she wouldn't be believed - and didn't believe in her mother's seances and tarot - yet there was a Dark Court and Light Court which each included faeries and that seemed to be totally accepted by everyone. Eventually I just accepted these strange inconsistencies and moved on.

But for the most part, I was able to look past these problems and get pretty engrossed in the story. What is most appealing is the setting, and lots of cool details were included, like the fact that it was fashionable during that period in Russia to speak French, something I learned while studying Russian in college. Russia in winter - as it is described here - really lends itself to a story with otherworldly elements. The paranormal somehow fits in quite well with that particular time and place.

Most of the book takes place during the winter and there are sleighs and ice skating and opulent furs and sparkling snow - and I know damn well it's actually freezing and miserable because I grew up in Maine, which is almost as bad - but this book made it sound exquisite and charming. The wonderful Christmas Eve scene with Katiya's family included descriptions of decorating the Christmas tree and eating mushroom soup and blini and sweet almond cakes and rice and tea from the samovar and warmed cherry brandy and I want to go to Russia immediately!

I also liked Katiya, despite the fact that she was a slow learner. She was determined to study medicine no matter what everyone around her wanted, and was willing to remain single all her life to do so. Amusingly, her distaste for domestic life rivaled - even exceeded - her distaste for the much-larger problems she faced. At one point she says, "I did not want to be a necromancer. I did not want to be killed by vampires. And I most certainly did not want to be stuck in a loveless marriage with nothing to do all day but change dresses and take tea with other bored women." I hear you, Katiya!

Since I've always found Russia so appealing and fascinating I just can't tell if this would have the same pull for others, but I think it might. Just don't focus on the inconsistencies I mentioned above, if possible, and let yourself be engrossed in the story. The Gathering Storm is the first in a trilogy and it is likely that I will read the next one when it comes out. This series holds promise.
Posted by 3goodrats at 8:30 AM