The Sandcastle Girls by Chris Bohjalian (2012) 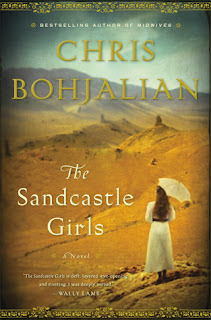 Freshly graduated from Mount Holyoke, Elizabeth Endicott travels to Syria in 1915 to help distribute aid to Armenian genocide refugees. She meets a young Armenian engineer named Armen, who has already lost his wife and daughter, and they develop a close friendship. It is only as he leaves to join the British Army that they realize how strong their affections have grown.

In 2012 New York, Laura Petrosian has never thought much about her Armenian heritage, but then a friend calls claiming to have seen a photo of Laura's grandmother advertising an exhibit in Boston. She travels to view the exhibit and conduct a little research, and finds out much more than she bargained for.

The novel moves back and forth between time periods, following several characters. In addition to Elizabeth and Laura we get to know refugees Nevart and Hartoun, and follow Armen into the trenches.

Genocide does not make for a happy story. The amount of death, starvation and rape in this novel can be staggering at times, especially when you consider that it is based on history and it's a history that most people know little about. I knew there WAS an Armenian Genocide, but that was the extent of my knowledge. Bohjalian did a great deal of research (as an Armenian, this is a very personal novel for him) and I suspect it's not exaggerated. Still, there is room for romance. The heart of the story is the growing relationship between Elizabeth and Armen and how they are able to overcome loss and make a new life for themselves.

I may be influenced by all the rave reviews, or because this is his most recent book and it's fresh on my mind, but this may well be Bohjalian's finest work to date. The lush language and strong sense of place further elevate this beautifully told story about characters whose lives are painfully real. Fascinating and absorbing.
Posted by 3goodrats at 9:00 AM