The Next Best Thing

The Next Best Thing by Jennifer Weiner (2012) 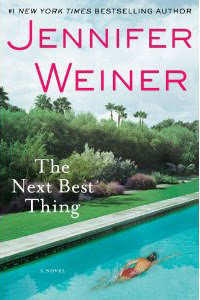 Ruth Saunders, orphaned and disfigured in an accident when she was three, has moved to Hollywood with her grandmother in hopes of making it big. But when the sitcom she's written gets chosen for production, she soon finds that many forces are conspiring to crush her dreams. The actress chosen to play the lead is nothing like Ruth pictured, the grandmother in the show is portrayed most unflatteringly, and the end result is completely different from what she wrote. Meanwhile, she is pining away for her boss and feeling helpless and hopeless.

The premise was pretty good, the beginning was promising, and I liked the ending. But I struggled with what came between. I'm not the best person to judge a book that revolves around Hollywood and tv since I view them both pretty unfavorably (though I share Ruth's love of The Golden Girls), but I found the shallow, spoiled characters and bad behavior all rather boring and annoying. Of course people in Hollywood are shallow, of course the network wants a skinny actress, of course you don't have complete creative control over your show. I know that and I haven't even visited that city; you'd think Ruth would know it after working there for several years.

Being unbelievably naive is only one of the ways in which Ruth was difficult to like. I quickly tired of her pathetic mooning around Little Dave who also wasn't appealing at all. For the longest time I didn't even think he was the real love interest because he was portrayed in such an unflattering way; I thought he was there temporarily until Ruth met her real love interest. In fact, I think the only character I liked was Ruth's grandmother.

Poor editing was also a problem, the inconsistencies proving distracting. In one scene, Ruth's outfit for a party is described as pants and a top, but later in the evening she is wearing a dress. Similarly, a character described as being in her early 40s got pregnant when she was 39 but her son is already 8 years old. I'm not the most observant reader when it comes to details, so if I'm noticing these things, there's a problem.

Occasionally, I spotted traces of the Jennifer Weiner I know and love. This description of Ruth's grandmother made me smile: "She shrugged, muttering to herself, and went to her bedroom to begin moving clothing from one plastic bag to another, a trick that served as the Jewish woman-of-a-certain age's version of meditation."

But these moments were too few and far-between. Jennifer Weiner can do better than this. I know this because I've read every single one of her books, and every single one is better than this. I expected more, especially since the novel is based on Weiner's own experience in Hollywood making her short-lived sitcom "State of Georgia." What I've liked most about Weiner's writing is how consistently good it is, so I'm especially disappointed in this half-hearted effort.
Posted by 3goodrats at 1:49 PM