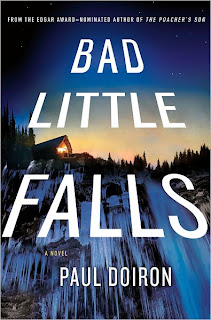 Game warden Mike Bowditch has clearly displeased his superiors, and finds himself transferred to "the unpeopled hinterlands of Washington County." During a snowstorm Mike is called to a residence where a local couple is trying to save a half-frozen man who claims his friend is still out in the storm. What appears to simply be an accident soon turns into a murder investigation. Mike, who apparently doesn't learn from his mistakes, ends up involved with the sister of the murder suspect, a young mother of a strange little boy. Meanwhile, someone is playing nasty tricks on Mike, seemingly trying to send him a warning message to mind his own business.

I wanted to try Paul Doiron again after listening to The Poacher's Son on audio, and when I heard that his new novel takes place in Machias, Maine I knew I had to read it. Bowditch describes the area as "a place known for its epidemic drug abuse, multigenerational unemployment, and long tradition of violent poaching" but it's also the place where I grew up. My town is not far away from Machias (and was mentioned a few times in the novel), but it was so small that Machias is where we had to go for any supplies other than basic groceries. So I know the area. Doiron apparently does too.

As with his first novel, he expertly captures the feel of rural Maine, making his characters and situations seem genuine. He doesn't live in Washington County as far as I know, but he's clearly spent some time there. Details like the McDonald's "Cafe" and the very tall mailbox with the "Air Mail" sign are not made up. He also included an Indian doctor at the Machias hospital, noting how out of place he was. There are, in fact, one or two doctors from far-flung countries working at that hospital. I'm always afraid of getting a tourist's-eye view in books set in Maine, but Paul Doiron knows the real thing.

Although the unusual and well-drawn setting make this novel stand out, it's also a good story. The plot was complex enough to easily hold my interest, and if the solution to the crime wasn't a complete shock, it was still a satisfying conclusion with small surprises along the way. The characters were varied, three-dimensional, and entertaining.

I like Mike Bowditch. I like his sense of justice and his need to set things right. He's as weak as any human being though, and manages to muck things up for himself just a bit now and then, but in a believable way that's easy to sympathize with. His empathy for others, and self-deprecating sense of humor make him both more realistic and appealing. You just can't help but root for him.
Posted by 3goodrats at 8:00 AM