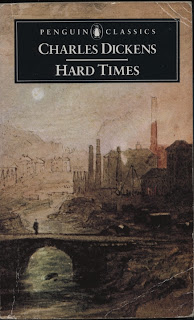 Mr. Gradgrand wants only facts. He is not a man of sentiment or feelings or whimsy. These ideas he instills in his children as the very core of their education and it affects their lives greatly, though maybe not in the way he wished. The first hundred pages or so are just setting the stage and are pretty slow, and I don't want to recount much of the plot as most of it happens fairly late in the book.

The backdrop is the bleak, industrial Coketown. One of the mill owners is Josiah Bounderby, a man who enjoys bloviating about his harsh upbringing and how he had nothing and pulled himself up by his bootstraps. If ever a working hand complains about anything, he exclaims at how they all want to eat turtle soup with silver spoons. He was a great character who I enjoyed reading about but actively disliked. (He reminded me a lot of someone from my hometown; I'm pretty sure I've heard him hold forth in similar ways, minus the turtle soup.)

This may be the shortest Dickens novel, at only around 300 pages, and though I liked it, it's probably my least favorite. As I mentioned, Hard Times started quite slowly, and was hard to get into. There were also a couple of characters, mill hand Stephen Blackpool and circus owner Mr. Sleary, whose dialogue was extremely difficult to understand. Blackpool's dialect was impenetrable at parts, and Sleary spoke with a lisp. If either was a major character with lots of page time, I'm not sure I could have made it through.

As with many of his novels, Dickens explored themes of social class, highlighting the working conditions of the poor mill hands while portraying wealthier characters as morally corrupt. The lives of our main characters were fairly bleak, and many situations resolved in a way that I found disappointing and in some cases unjust. Still, I'm glad I read it and enjoyed his humorous characters as always. Next time though, I'll be picking up one of the longer novels I've been wanting to read but putting off, like Bleak House or David Copperfield.
Posted by 3goodrats at 8:10 AM