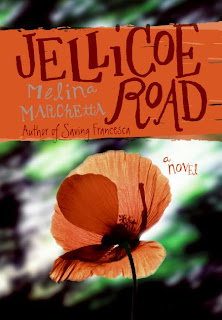 When she was eleven, Taylor Markham was abandoned by her mother on the Jellicoe Road. She was taken in by a stranger named Hannah who brought her to the Jellicoe School where she's lived ever since. When Hannah very suddenly goes missing at the same time that blast-from-her-past Jonah Griggs comes back to town, Taylor is thrown into an emotional whirlwind. She continues to read a manuscript that Hannah left behind, slowly realizing its significance and how it fits into her life.

Taylor has been through a lot for such a young person, and has dealt with it through a selective memory. She makes allusions to traumatic events in her past without explaining them fully - like the mysterious Hermit who shot himself in front of her, and the time she ran away with Jonah Griggs and was caught and brought back before she had time to find her mother. Haunting her throughout are strange dreams of a boy sitting in a tree who seems to want to talk to her.

Just as Taylor wants to find her mother again - as screwed-up and drug-addled as she remembers her - so all the characters are missing someone or something. They are desperate to connect, which is perhaps why they formed such strong friendships, the kind you always remember, the kind that last forever even if you are apart. Taylor and her friends were, in a way, an echo of the characters in Hannah's manuscript. Their story may not be as tragic, but I picture them having the same life long bond.

The story takes place in Australia, which I kept forgetting until I came across an occasional reference to  wearing a singlet (is this an Australian thing? I don't even know) or the word "gaol" instead of jail, or a mention of how far they were from Sydney. Then I'd suddenly start picturing the characters speaking with Aussie accents. Even though it wasn't full of references to kangaroos or Marmite, I liked that it was set in a place that seems so rare in novels.

I also liked how the bits and pieces of Taylor's past and the snippets of Hannah's manuscript were sprinkled throughout story, slowly piecing it together for Taylor and the reader at the same time. It all came together gradually, not in shocking reveals but in little glimpses and bits from which you can guess what's happening before the truth is confirmed. Though the story is heartbreaking, it's also hopeful and beautiful and haunting. Classic young adult fare.