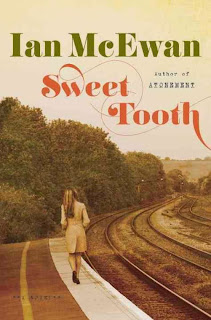 While finishing her education at Cambridge, Serena Frome is recruited for British intelligence agency MI5. Project Sweet Tooth funds writers whose political views are in line with the government. Serena is sent to hook an upcoming writer for the project, pretending she's with a philanthropic organization, very quickly finding herself in a relationship with him. As you might expect, being a spy means that Serena's life and relationships are fraught with secrets and betrayal.

This novel is less spy and more relationship than I expected. The whole reason Serena gets into MI5 is because of her relationship with a professor, and then she gets into a relationship with her very first (and last) recruit for Sweet Tooth. Not to mention the other, less important, relationships she has in between; basically, she gets romantically involved with every guy she ever meets. It was just so unprofessional too, especially the one with Tom Haley, the author. How does she expect anyone to take her seriously? And how does she think that relationship will go since it's based entirely on lies? I got a little irritated with her.

But Serena isn't all bad, and in fact she's interesting in some ways. She loves reading but studied mathematics because she happened to be good at it. Her parents, because of some vaguely feminist notion, persuaded her that she owed it to herself to go into a field where women are underrepresented if she has a talent for that subject. So she did, but she always maintained a love of books, even the most lowbrow. I loved this as well - she kept trying to convince everyone that even the most pulpy novels were just as good as literary award-winners.

Other than discussing Serena's character, I'm having a hard time finding much to say about Sweet Tooth. There was little I disliked and, in fact, I enjoyed it while I was reading it, but even though I finished just a few days ago, I already barely remember it. In this way, it is definitely different from McEwan's other books, which haunted me long after I finished them. But I had heard that it was different from his other novels and in fact it seems like people who like McEwan don't like this book and vice versa. So it's hard to know whether or not to recommend it. I liked it, but not nearly as much as his other books.
Posted by 3goodrats at 5:11 PM