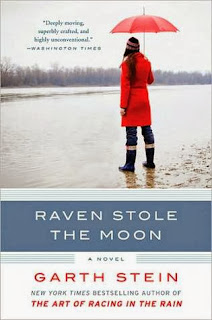 It's been two years since Jenna and Robert's son drowned on their trip to Alaska. Jenna has been unable to get past it, and on the night of the second anniversary of the event she leaves Robert at a party near their home in Seattle and goes back to where it happened. Jenna's Native American grandmother lived in nearby Wrangell, and it is here that Jenna begins. She learns about an old Tlingit legend about creatures called the kushtaka and becomes convinced it is they who have her son.

I really liked the premise of this book, but ultimately it required buying into Native American mysticism. As the story progresses it becomes apparent that the kushtaka are supposed to be real, and Jenna begins pursuing spiritual help in the form of a shaman. It's a very unusual story, and quite different from what I expected based on the cover blurb and Goodreads descriptions, neither of which hint of the magical realism in the story.

I almost put the book down a few times, but stuck with it because I liked the idea of this bereaved mother running off to Alaska, visiting her grandmother's abandoned house, and getting to know some of the locals. I so badly wanted her to just start a new life for herself, which of course was impossible given the loose ends of her husband and the rest of her life back in Seattle. As it progressed, the aspects of the story I liked gave way to more about the kushtaka but by then I had read the majority of a 400+page book so I wasn't going to stop there.

None of the characters were fleshed out quite enough, but I really thought I would have liked Jenna and her new Wrangell friend Eddie more if I was able to get to really know them. The shaman David Livingstone was also a complicated character who I never quite understood as well as I should have. Perhaps the idea for this story was just a bit too ambitious.

This is all not to say that it's a bad book. I think a different person, someone who is more interested in Native American religion or who is more open to unusual spiritual themes would appreciate it. It just wasn't for me.
Posted by 3goodrats at 9:00 AM