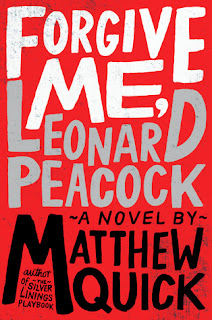 On the morning of Leonard Peacock's 18th birthday, he packs a gun in his backpack along with four gifts. The gifts are for the four people who are most important to him: his elderly neighbor Walt with whom he watches Humphrey Bogart movies; a young woman he developed a crush on when she handed him a religious pamphlet at the subway; a guy from his school who lets Leonard listen to him practice his violin; and his favorite teacher, Herr Silverman. Once he distributes these gifts, Leonard plans to take his gun and murder his former best friend before killing himself. It's going to be a hell of a day.

As Leonard visits each of these friends in turn, he reveals his story about each one and why they are important. It's clear early on that Leonard is fairly lonely, which is reinforced by the distance between him and the people to whom he's bringing gifts. His mother is a self-absorbed fashion designer who lives in New York most of the time, leaving Leonard alone in their home in Philadelphia, and his father is out of the picture. Still, the major reasons for his plan are shrouded until late in the story.

I was skeptical about the premise of this book at first - I'm so sick of hearing about teenagers taking guns to school to blow up their classmates and/or teachers. Do I need to read about it in fiction too? But I wanted to give Matthew Quick another chance after Sorta Like a Rock Star, which I thought held promise even though I didn't love it. I'm so glad I did.

Leonard is in obvious pain, but is so smart and funny I couldn't help but like him. I knew he must have a good reason for what he was planning and through the entire book I just knew the tragedy would be averted, because how could you kill this character, Matthew Quick? Of course I won't tell you what happens but I'll say that I loved this book the whole way through.

I loved the stories about his friendships with the four characters he has gifts for. They are all very different people, but Leonard appreciates them all for who they are and how they have touched him. I especially liked his relationship with his neighbor Walt. All they did together was watch Bogart movies, and their conversations were built entirely of quotes from those movies, and somehow it was just very sweet.

What ultimately sold me on trying this book was listening to a sample of the audio, which proved a great choice. I'm pretty sure that Noah Galvin is actually a teenager, and he perfectly captures Leonard's character. I could probably listen to this guy read anything. And in fact, it turns out he also narrated one of my favorite books, The Perks of Being a Wallflower. If I decide to tackle Perks a fifth time, I'll be sure to try the audio. As for Leonard Peacock, you probably can't go wrong with either format. I highly recommend it.
Posted by 3goodrats at 9:00 AM